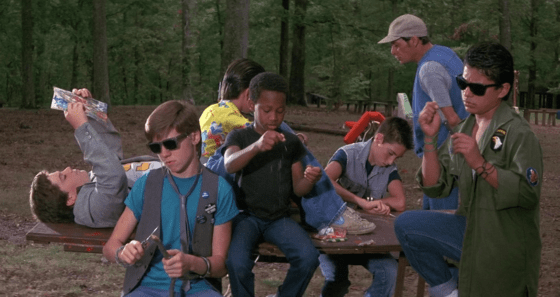 Along with the bafflingly sincere ballad from Ernest, “Gee I’m Glad It’s Raining”, Ernest Goes to Camp also had a classic 80s “gearing up” montage in the vein of something like The Monster Squad set to the song “Brave Hearts” by Gary Chapman.  When the evil Sherman Krader and his mining operation are ready to demolish Camp Kikakee, Ernest (Jim Varney) and his group of Second Chancers campers come up with various improvised weapons, explosives, and the local wildlife to fend them off, which necessitates the montage.  Gary Chapman is best known for his work in Christian music and country, hosting various country shows on The Nashville Network and syndication.  He worked on another movie, Maverick, as one of the artists singing that movie’s version of “Amazing Grace” in 1994.  There wasn’t an official music video but you can check out the montage scene from Ernest Goes to Camp below.