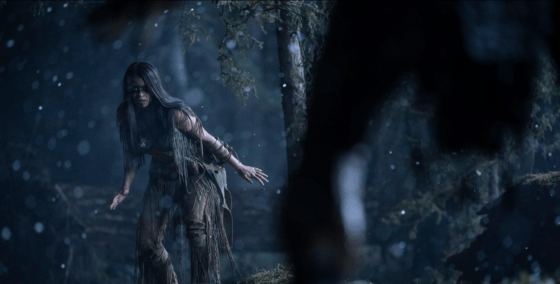 The Predator series has had some ups and downs since the original 1987 classic, hitting a low with the most recent entry, The Predator.  Prey, while it doesn’t top the original, is easily the best movie in the franchise after the original, especially if you’re a fan of stuff like the OG Dark Horse comics.

Set in 1719, Prey follows Naru (Amber Midthunder), a young Comanche woman who wants to be accepted in the tribe as a warrior like her brother Taabe (Dakota Beavers).  Leaving home with her dog Sarii, Naru encounters an alien hunter, the Predator (Dane DiLiegro), who has arrived on Earth to hunt down the local predators in the area and collect their skulls as trophies.  The movie does a great job of bringing things back to basics after some of the more recent entries tried to overly complicate things with multiple Predator factions and other additions to the mythology.  Prey recalls the original as it’s a straightforward battle for survival in the woods, like an extended version of Arnold’s final battle in the original where he has to come up with improvised traps.  The setting makes the battle even more interesting as Naru and her tribe don’t have explosives or miniguns, so they have to try and use their knowledge of the environment and their hunting skills to battle the Predator.  The Predator, meanwhile, is a more savage and primitive version than we’ve seen before, considering it’s over 250 years before the one that arrives in the South American jungle in the 80s.  It still has far more advanced weaponry than the contemporary humans but there are some extremely cool twists on tech we’ve seen in the franchise before, like the three targeting lasers each having a metal bolt and not a plasma blast and relying more on his blades, spear and a shield to eviscerate his opponents in spectacularly bloody fashion, which sometimes reveals him in stealth mode due to the amount of blood.

I loved Amber Midthunder on Legion and she’s great in Prey as well, a badass that you’re rooting for from the beginning and she gets to show off her strategic thinking as well as her warrior skills.  Dakota Beavers is excellent as well and his character could have been kind of a dick as the favored older brother but he feels like he has a genuine concern for his sister but knows he can’t contain her.  Dane DiLiegro has fantastic physicality as The Predator and makes him an extremely vicious and ruthless opponent, ripping through humans and animals alike effortlessly.  There’s a set piece in a burned-out forest where the Predator battles a group of French fur trappers that is easily one of the best Predator action sequences in the franchise.  The action is all shot excellently with no doubt about where everything and everyone is and the whole movie looks incredible, which is a credit to director Dan Trachtenberg and cinematographer Jeff Cutter.  The only nitpick might be that some of the animals are very obvious CG, which contrasts all the practical action with the Predator, but it’s not anything that would ruin the movie.

Prey is a fantastic entry in the Predator franchise and easily sits behind the original movie if you’re ranking them (I would say Predator, Prey, Predator 2, Predators, The Predator for me).  Amber Midthunder is a great protagonist and the movie does an excellent job of keeping things simple but exciting with its straightforward battle through the woods and it makes great use of the time period as well.  I would love to see more time periods explored on film for Predator, which is something the Dark Horse comics did all the time, sending the Predators to the Civil War, World War I, etc, and seeing how the soldiers or people of that time were able to battle and survive something so far advanced from them.