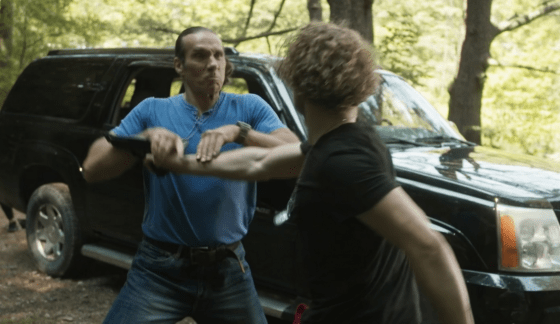 Bring Him Back Dead seemingly had a tried and true premise and some fun stars who have been badass in other action movies but the movie basically squanders all of it and is a boring, rote slog.

The awesome Gary Daniels stars as Alex, a member of a criminal gang that pulls a diamond heist that goes sideways, resulting in collateral damage and one of their own shot and bleeding out.  Getting to their secluded hideout in the woods, the gang is ordered by their boss Trent (Louis Mandylor) to wait for their buyer to arrive in a few hours but Alex betrays the group, drugging them and stealing the diamonds and taking Trent’s daughter Lisa (Katie Keene) hostage.  Trent orders the rest of the gang to hunt down and kill Alex and recover Lisa and the diamonds.  The plot is pretty standard heist/crime thriller stuff with most of the characters being stock archetypes who say stereotypical, cliche dialogue.  It seems like it’s trying to go for a Tarantino/Reservoir Dogs style but the difference is that Tarantino sprinkles in interesting character beats, pop culture tangents, and other interesting aspects to the dialogue while ramping up the tension.  The dialogue in Bring Him Back Dead is boilerplate tough guy talk that doesn’t add anything to the characters or ratchet up the tension.  The setting is also pretty boring and uninteresting as well.  There have solid movies that take place entirely in the woods that utilize the setting in cool and interesting ways, i.e the recently released and excellent Prey, but in Bring Him Back Dead, it feels more budgetary than anything.  I think Red Letter Media has said before that “it doesn’t cost anything to shoot in the woods” and it definitely feels like someone on the production had a camp or knew someone with a camp and they just shot there on the cheap.  The ending of the movie also feels rushed and throws in a bunch of “shocking” deaths and double-crosses one after other but it doesn’t really help to make things exciting or interesting.

The movie’s biggest crime is probably wasting Gary Daniels.  Daniels has been awesome in various martial arts movies and stuff like The Expendables and every time he’s on screen, you know he has legitimate martial arts skills.  There are only 2 or 3 fight scenes in Bring Him Back Dead and while Daniels gets to do a couple of cool kicks or strikes, the fights are kind of sloppy and boring and sometimes feel like the rehearsal for the fight instead of the finalized version.  The movie also only has a limited number of characters and as they get killed off, the fewer chances for fights and action there are.  If there had been a ton of faceless goons for Daniels to really go to town on in the woods, you probably would have had a much more exciting and cool premise for a movie and Daniels definitely deserves a starring role in a better movie.

With its eye-catching title and seemingly solid premise, Bring Him Back Dead seems like it would be a solid B-action movie but lacks exciting action or an interesting plot.  It’s all standard, boilerplate heist/crime movie cliches and there’s more wandering around in the woods than cool fights or intense conversations.

(Bring Him Back Dead is available on VOD, Digital, and DVD now)