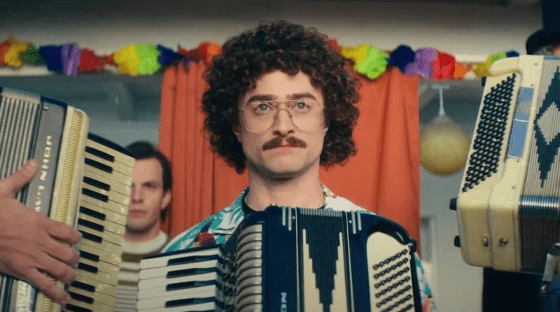 One of the greatest musicians of all time, Weird Al finally gets the biopic treatment, with a twist, in November with Weird: The Al Yankovic Story.  Daniel Radcliffe stars as Al and the movie follows his discovery of song parodies, which brings him to the attention of Dr. Demento (Rainn Wilson) to his rise to superstardom and his torrid relationship with Madonna (Evan Rachel Wood).  True to Al, Weird seems like it’s going to basically be a parody of biopics, like Walk Hard but if Dewey Cox was an actual musician who was fully behind the project.  Julianne Nicholson, Toby Huss, Thomas Lennon, Will Forte, Spencer Treat Clark, and Al himself co-star, and the movie was directed by Eric Appel, who directed the previous Al biopic parody video that starred Aaron Paul on Funny or Die.  Weird is on Roku Channel on November 4th and you can check out the trailer below.