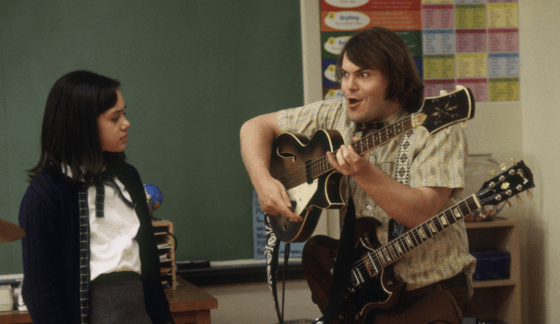 In what is easily one of Jack Black’s best roles, School of Rock used Black’s comedic chops and musical prowess to full effect back in 2003.  Black plays Dewey Finn, who is kicked out of his band right before a pivotal Battle of the Bands competition and he also owes his friend and roommate Ned (Mike White) back rent on their apartment.  To solve the rent issue, Dewey impersonates Ned when the prestigious Horace Green prep school needs a sub but he soon realizes that the kids may be able to solve his band issues as well, as they are exceptionally talented musicians.  Creating a class project to form a rock band, Dewey introduces the kids to classic rock and helps break them out of the shackles of the school and their parents.  Joan Cusack, Sarah Silverman, and a pre-iCarly Miranda Cosgrove co-starred and the movie was directed by the always interesting Richard Linklater.  The movie was a massive hit and it spawned a Broadway musical and a Nickelodeon TV show with Alex Brightman playing Dewey Finn on Broadway and Tony Cavalero playing Dewey on Nick.  You can watch the entire movie below thanks to YouTube and Paramount.

Everything Action Theater: Terror of Mechagodzilla