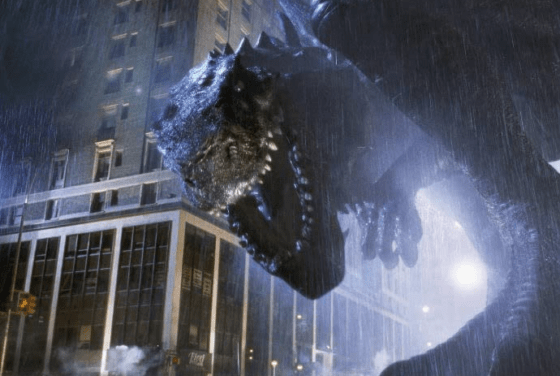 Although “Come With Me” by P. Diddy is probably the song most remembered from the soundtrack to 1998’s Godzilla, there were a ton of other songs off that album, including “Deeper Underground” by Jamiroquai.  The song was released a few months after the movie hit theaters in May in July of 1998 and it went on to become a hit in a number of countries, including the UK where it was the band’s first song to hit #1.  The following year in 1999, one of the band’s biggest hits, “Canned Heat” would be released and, fun fact, “Deeper Underground” was a bonus track on the same album that “Canned Heat” came from, Synkronized. There was an official music video for “Deeper Underground” to tie it into Godzilla with an audience watching the movie (with old-school 3D glasses for some reason) but Godzilla’s foot crashes through the screen, unleashing water, cars, and other debris.  As the audience flees, Jamiroquai’s lead singer Jay Kay dances through the chaos.  After the hype about Godzilla died down, the video was slightly tweaked so that the movie on screen featured a man breaking an aquarium instead of Godzilla’s foot, but everything else remained exactly the same.  Check out the video below.