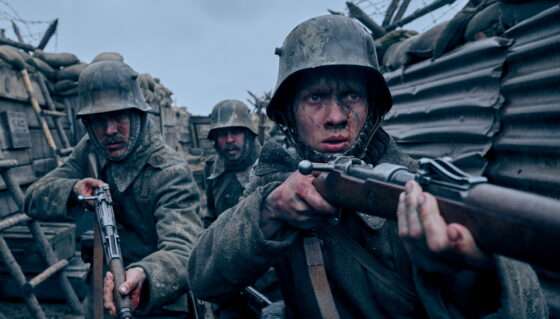 Erich Maria Remarque’s classic novel All Quiet on the Western Front has seen numerous adaptations over the years but a new one from Netflix is arriving in October.  Like the book, the movie follows a young German soldier named Paul as he is assigned to the Western Front of World War I.  Initially enthusiastic and excited about the thrill of battle and the opportunity to fight for his home, Paul and his fellow soldiers soon realize the living hell that World War I truly was.  Daniel Bruhl, Sebastian Hulk, Albrecht Schuch, Anton Von Lucke, Devid Streisow, and Edin Hasanovic co-star and the movie was directed by Edward Berger, who has directed episodes of The Terror, Your Honor, and Patrick Melrose along with movies like Jack and All My Loving.  All Quiet on the Western Front will hit limited theaters on October 14th and then arrive on Netflix on October 28th.  Check out the trailer below.