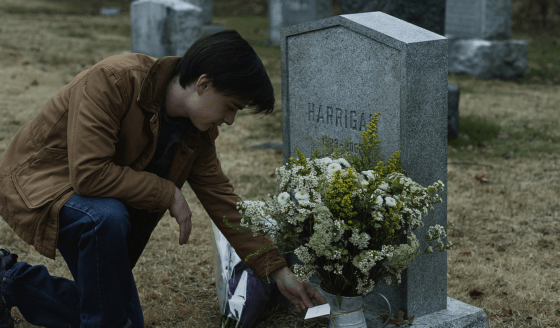 Based on a short story by Stephen King, produced by American Horror Story’s Ryan Murphy and Blumhouse, Mr. Harrigan’s Phone comes to Netflix in October with lots of horror talent behind the scenes.  Stephen King vet Jaeden Martell stars as Craig, who is friends with an older neighbor, Mr. Harrigan (Donald Sutherland).  When Mr. Harrigan passes away, Craig places Mr. Harrigan’s iPhone in his pocket at the funeral and calls it when he’s desperate after a beating by a bully tormenting him.  When that bully ends up brutally killed, Craig begins to believe that Mr. Harrigan heard his call from beyond the grave and is exacting vengeance on his behalf.  Joe Tippett, Kirby Howell-Baptiste, Alex Bartner, and Thomas Francis Murphy co-star, and John Lee Hancock, who most recently directed The Little Things, wrote and directed the movie.  Mr. Harrigan’s Phone is out on October 5th on Netflix and you can check out the trailer below.

Finn Jones Digs Into the Past in The Visitor (Trailer)