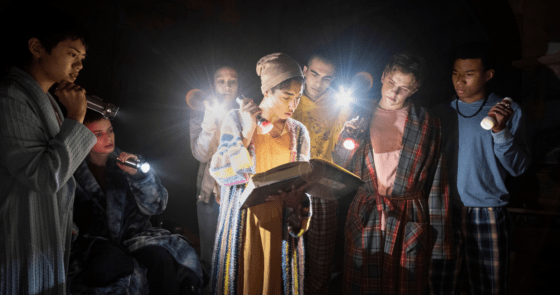 Mike Flanagan is back on Netflix in October to follow up Haunting of Hill House, Haunting of Bly Manor, and Midnight Mass with an adaptation of the 90s Christopher Pike classic, The Midnight Club.  Set at the Rotterdam Home hospice, seven terminally ill teens form a secret group, The Midnight Club, where they tell each other ghost stories at night.  The group makes a pact that when the first one of the group dies, they will try to communicate from beyond the grave.  When one of them does pass, bizarre events start happening at the home.  Iman Benson, Adia, Igby Rigney, Ruth Codd, Aya Furukawa, Annarah Cymone, William Chris Sumpter, Sauriyan Sapkota, and Nightmare on Elm Street’s Heather Langenkamp star, and Zach Gilford, Samantha Sloyan, Rahul Kohli and William B. Drake appear as well.  Flanagan co-wrote all but one of the episodes and directed the first two episodes of the series.  The Midnight Club debuts on October 7th on Netflix and you can check out the trailer below.