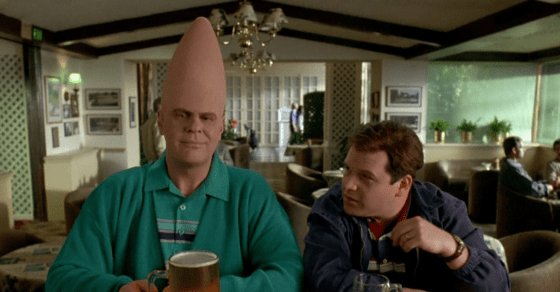 Although not included on an actual Red Hot Chili Peppers album until 2003’s Greatest Hits, “Soul to Squeeze” was included on the soundtrack album for Coneheads.  Based on the SNL sketch, Dan Aykroyd and Jane Curtin as Beldar and Prymaat Conehead, aliens with conspicuously large heads and bizarre ways of speaking who have nevertheless adapted to life on Earth posing as humans from “France”.  Along with a number of classic songs like “Tainted Love” and “Kodachrome”, “Soul to Squeeze” was the big hit off the album, reaching #22 on the Billboard charts and #1 on the Modern Rock chart.  It also charted in numerous countries around the world, including becoming RHCP’s first hit in Sweden.  For the music video, the Chili Peppers subtly pay homage to the movie, setting the video at a traveling circus where one of the performers is a Conehead (although maybe not an alien).  Chris Farley, who co-starred in the movie, also has a cameo in the video.  Check out the video below.