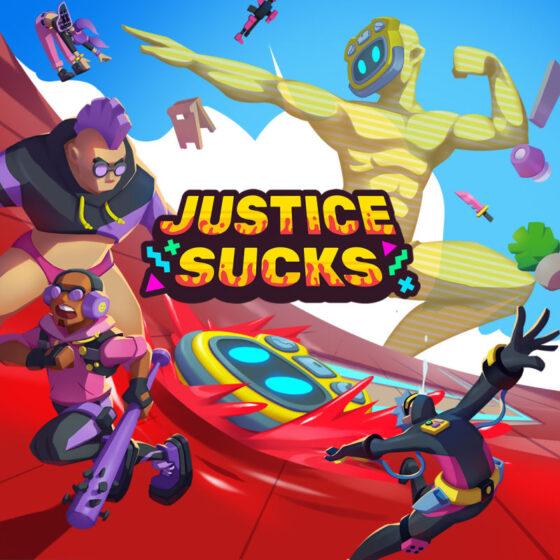 The world’s a filthy place and it needs tidying up. One beloved vacuum robot is on a quest to rescue its owners and deliver some much-needed punishment in Samurai Punk and Tinybuild’s Justice Sucks. Integrating stealth, tactics, and bubbly brutality, Justice Sucks is a hilarious action-packed title that lets players live out their killer robotic fantasy. You play as Dusty McClean, a helpful smart vacuum cleaner that cleans up the McClean household. Dusty can pull in debris, toggle electrics, and zoom under tight spaces. On one fateful night, the McClean household is broken into and something in Dusty’s programming urges him to protect the house with extreme prejudice. That event flags Dusty’s manufacturer, Familycorp, to unleash their private arm force to recall Dusty and kidnap the McClean to hide the company’s repetition. But Dusty finds new strength by teaming up with Sexy McClean, a powerful AI that is the manifestation of Dusty’s fighting spirit. With some new cleaning skills and deadly upgrades, the pair embark on a path of vacuuming vengeance that will be soaked in blood, then cleaned up neatly.

Justice Sucks’ tactical stealth gameplay focuses on Dusty quietly planning the demise of his foes while avoiding direct combat. As mighty as Dusty and Sexy can be in the virtual world, they still are in a compact vacuum cleaner and are vulnerable to physical weaponry. But being smaller has its advantages, Dusty can quietly sneak around and wait in hidden spots around dense surrounds. With the ability to hack, Dusty can turn ordinary appliances and electronics into deadly traps. Dusty and Sexy wage robotic guerrilla warfare, turning a high-tech environment into a murderous playground. When Dusty is in reach and turns on hack mode, time slows down and hackable objects are highlighted. Fans, electrical socks, doorways, and windows are weapons for Dusty to damage foes with. But if the enemy is still standing, Dusty can suck up objects and launch them for a quick attack. This won’t do a lot of damage and comes in handy to dispatch a foe. 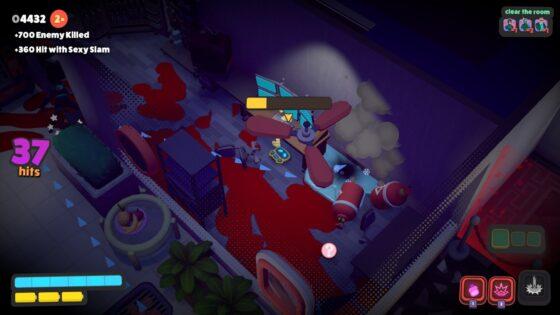 However, enemies won’t be silent about being attacked. Too much noise brings enemies together and on high alert, making it harder to trick and faster to react to Dusty’s presence. Alerted enemies will break off their regular patrol routes and pursue Dusty’s last known location. Luckily, Dusty can duck into a hiding spot to wait for the attention to die down and make it to another area. It is vital to plan ahead for multiple escape routes, the next trap location, and where enemies are moving in. This greatly helps to adapt to the chaotic moments when plans go right or wrong.

Another big part of the gameplay besides making enemies bleed is cleaning up the gore and corpses left behind. It’s not typical that robots can gain powers from human blood, but Dusty has the ability to charge up from consuming blood and body parts. Sucking up blood restores Dusty’s battery health and builds up his special abilities to unleash powerful attacks, buffs, and deadly standalone traps. Dusty can only equip one type of ability each, so this means Dusty can’t just be a mini tank on the battlefield. Tho, Dusty can still be pretty menacing with the right combination of abilities. 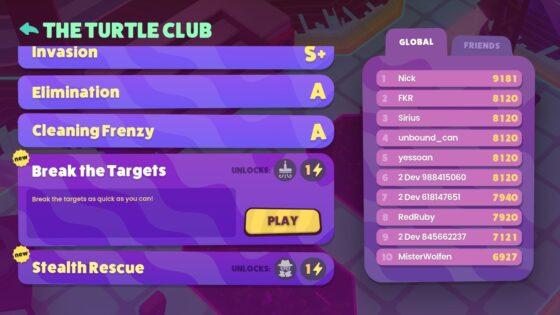 There are 5 main stages in the game that contain a story mode mission and a few submissions. Story missions have Dusty protect and rescue the McClean members from villainous groups. The submissions are challenge modes that change up objectives of the levels. The objectives can be for Dusty to defuse bombs, deliver mail, complete the level in total stealth, or swiftly clean before the time runs up. Completing the optional sub-missions rewards players with new abilities and upgrades that make it worth replaying levels over.

Justice Sucks absolutely nails the fun and chaotic energy of its premise. The offbeat humor is a big enjoyment factor for playing the story mode. From the hard-drawn animation sequence, the James Bond-like intro, and Sexy McClean’s poses, the game leans into subverting comedy. It’s a title that doesn’t take itself too seriously but is serious about the gameplay. Dusty is easy to control and hacking becomes second nature once you get a good understanding of the traps. It is sometimes hard to see what the range and function of certain traps do unless you use one of the special abilities to see. But that is forgivable as the gameplay greatly improves with more replays and new combinations of abilities. Mixing abilities offers some customization depth and experimentation to find new methods to complete objects better. Stages and challenge missions are well varied and offer enough that replaying them multiple times doesn’t feel like a chore. The gameplay knows what it does well and doesn’t cram in too much to pad out the game time. Justice Sucks sucks you into its hilarious world and shoots you out with a laugh on your face, and that makes it a great title to pick up and play today. Justice Sucks was released September 8th for Steam, Epic Store, Playstation 4/5, Switch, and Xbox Series X/S.