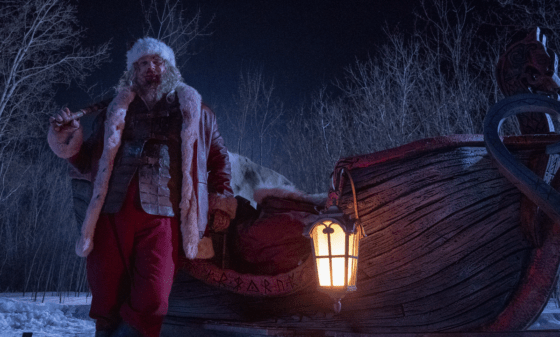 We’ve seen many iterations of Santa Claus over the years but Violent Night’s has the potential to be the most badass this coming December.  Played by David Harbour, Santa is making his rounds when he arrives at the home of a wealthy family’s compound to deliver presents.  He finds that the family has been taken hostage by mercenaries led by John Leguizamo and Santa shifts into action hero mode to take them down and save the family, especially young Trudy Lightstone (Leah Brady), who is on Santa’s nice list.  Edi Patterson, Beverly D’Angelo, Cam Gigandet, Alexis Louder, and Alex Hassell co-star, and the movie is directed by Tommy Wirkola, who previously directed the Dead Snow movies and Hansel & Gretel: Witch Hunters.  It looks like a fun, violent holiday action movie with some fun uses of Santa’s powers to take down bad guys.  Violent Night is out on December 2nd; you can check out the trailer below.