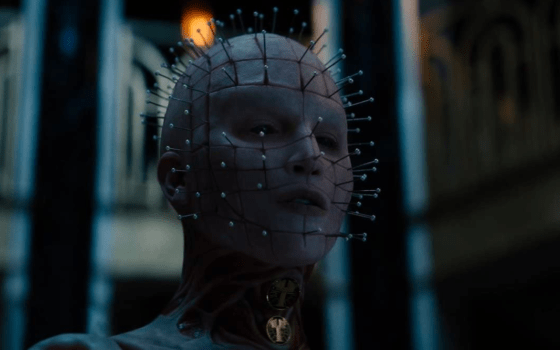 After hitting the absolute rock bottom of direct-to-video sequels, the Hellraiser franchise has been rebooted for Hulu by director David Bruckner, who delivers a much different but mostly solid reimagining of the series.

Although ostensibly based on the original novella The Hellbound Heart, like the original 1987 movie, the plot of the new Hellraiser is drastically different from the original movie.  There’s no Frank Cotton or Julia murdering men to regenerate him, instead our main character is Riley McKendry (Odessa A’zion), a young woman recovering from drug addiction.  Desperate for cash, she joins her boyfriend Trevor (Drew Starkey) to rob what he claims is an abandoned storage container that he believes a rich billionaire is storing art or other valuables in.  Finding only a strange puzzle box, Riley takes it and tries solving it but, in doing so, she becomes the latest target of the Cenobites, beings from another dimension who seek the most extreme sensations of pleasure and pain.  Anyone cut by the hidden blades of the puzzle box is sacrificed to the Cenobites and the box transforms into a new configuration and completing all the configurations gives the person wielding the box in its final form the chance at a powerful gift from Leviathan, the “god” who rules over the Cenobites dimension.  There are definitely some interesting new spins on the Hellraiser mythology, including the process of progressing through the various configurations of the puzzle box and the multiple “gifts” at the end of the process but things get a bit silly as the movie progresses where things turn into a mix of Final Destination and a slasher movie where people are either accidentally cutting themselves on the box or just being stabbed with it and it gets a bit convoluted and muddled toward the end when multiple people are all stabbed at the same time. That’s also heightened by Goran Višnjić, Roland Voight, who serves as another antagonist along with the Cenobites but is obviously much less interesting than Pinhead and her horde. It also feels like it’s missing some of the original Hellraiser’s disturbing choices where Julia deliberately was murdering men to regenerate Frank and this new movie feels like it might be going in that direction when Riley’s brother Matt (Brandon Flynn) is the first sacrifice to the Cenobites, so it seems like maybe Riley might have to decide if she’s willing to kill others to get Matt back but the movie ultimately doesn’t really do much with that plot point.

The big thing the new Hellraiser gets right is the Cenobites, who much like the original movies are the true stars of the movie.  Jamie Clayton is excellent as the new Pinhead, who coldly tortures and flays the victims of the puzzle box and there’s a great mix of returning favorites, like Chatterer, and new Cenobites.  The look of the Cenobites is also updated but the movie does a great job of making them still instantly recognizable but putting its own spin on them.  They are more otherworldy and disturbing here, losing their S&M leather for more unique and horrific body modifications.  There are some great, gory moments of the Cenobites using their powers, like when Pinhead uses her trademark chains or the new Cenobite, the Gasp, who uses barbed wire.  The effect of the Cenobites manipulating reality and opening new doorways and expanding buildings in seemingly impossible ways is done extremely well too, like in a standout sequence where Riley and her friends are trying to escape in a van with one of their members having been cut on the box and the Cenobites manipulate and twist reality for the cut person while the rest of the crew don’t notice until it’s too late.  The non-Cenobite characters are not particularly great but they aren’t outright terrible either and the draw is definitely the Cenobites themselves and you’re mostly waiting for them to appear if you’re in a scene without them.

The new Hellraiser is a solid horror movie that rescues the franchise from the horrific dregs it was dealing with just a few years ago but might not top the original for fans of the series, especially considering how different it is plot-wise compared to the novella and original movie.  The new lore and the reimagined Cenobites are great and it looks fantastic with some cool ideas and gory kills.  If you’re looking for something to watch for Halloween, Hellraiser is a solid choice to add to your watchlist.

Horror Villain of the Week: Pinhead