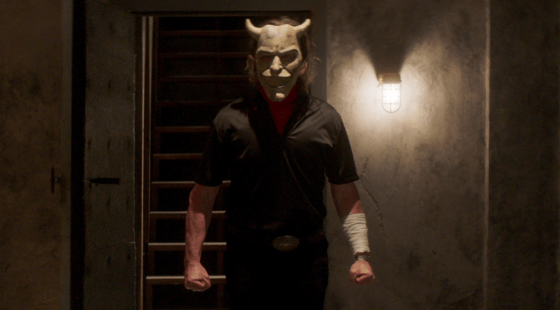 Name: Albert Shaw aka The Grabber

Origins: Not much is known about Albert Shaw’s background but in the 70s in a Denver suburb he began kidnapping young boys, holding them in the basement of the house he shared with his drug-addict brother Max.  Subjecting his victims to sadistic mind games, he eventually kills them and then buries them across the street from his home in the basement of an identical but abandoned home.  Shaw put on airs of being a magician to his victim and wears an elaborate horned mask that has interchangeable pieces that can reflect his current state of mind.

Powers: Shaw is a normal human but he can hear the supernatural calls of The Black Phone, which his victims use to communicate with Shaw’s last victim, Finney Blake, and help him plan his escape.  He is also patient to the extreme, waiting for hours to see if his victims will fall into a trap after he leaves their cell door unlocked, and extremely sadistic when angered.

Main Adversaries: Finney Blake, the spirits of his past victims

Horror Villain of the Week: Bughuul