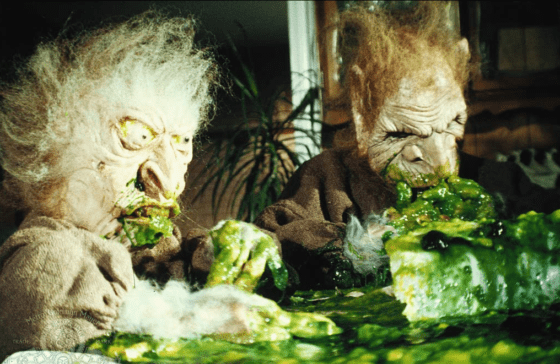 One of the most beloved bad movies of all time, Troll 2 is a cult classic full of bizarre and hilarious moments and strange characters.  Originally marketed as a sequel to the 1986 movie Troll, Troll 2 has basically no connection, not the least of which is that the creatures in the movie are not actually trolls, but goblins.  When his family exchanges home with another family from the strange little town of Nilbog, young Joshua Waits is warned by the ghost of his grandfather that the family is in danger and he tries to warn them before it’s too late and they are turned into horrible green glop for the town’s goblin population to eat.  There was a massive language barrier between the movie’s crew and Italian director Claudio Fragasso and that, combined with the movie’s low budget, led to the wonderfully insane final product where you can have scenes where a young boy pees on his family’s dinner and then his father yells at him that, “you don’t piss on hospitality!”.  One of the best movie documentaries ever made, Best Worst Movie, goes into detail about the craziness of the film but you can watch the entire movie below thanks to YouTube.

Everything Action Theater: School of Rock