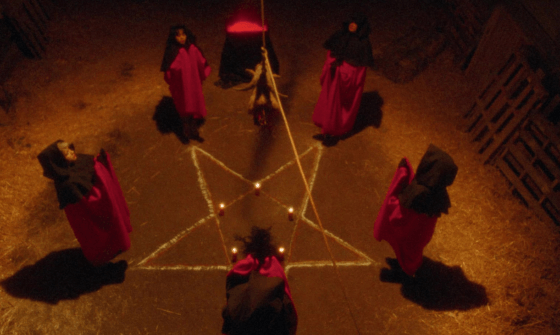 Although it features the rocking tune “Devil’s Son” by metal band DC La Croix, 1988’s Hack-O-Lantern strangely isn’t a part of the surprisingly large heavy metal horror subgenre.  Going direct to video, Hack-O-Lantern stars Hy Pyke stars as “Grandpa”, who secretly runs a Satanic cult that sacrifices victims on Halloween and who wants his grandson Tommy (Gregory Scott Cummins) to join him in the cult.  The group’s murder spree draws the attention of the local cops and lots of over-the-top gore and nudity ensues.  DC La Croix doesn’t really factor into the plot in any meaningful way and it seems like the full performance of their song “Devil’s Son”, presented as a daydream as Tommy listens to the cassette on his Walkman, is just there to pad out the run time of the movie.  Hack-O-Lantern was featured in Episode 58 of Best of the Worst during one of the gang’s wonderful Halloween Spooktaculars, which is probably where a lot of people were first exposed to the movie and the song.  You can check out the DC La Croix segment of Hack-O-Lantern below.