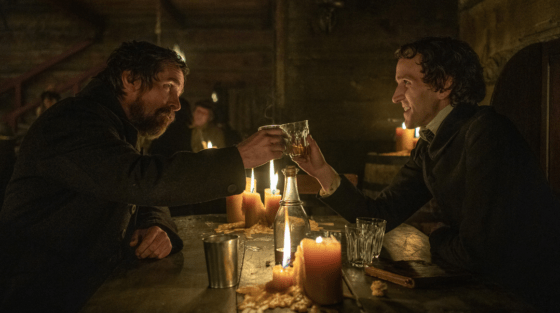 After delivering the gruesome horror movie Antlers last year, Scott Cooper is back and reteamed with his Hostiles star Christian Bale for The Pale Blue Eye.  Coming to Netflix in January, Bale stars as detective Augustus Landor.  Landor is called to West Point when a cadet is murdered but finds everyone at the academy seemingly unwilling to provide any useful information or help.  Landor gets one of the cadets, a young Edgar Allan Poe (Harry Melling) to help with the investigation.  Gillian Anderson, Lucy Boynton, Charlotte Gainsbourg, Toby Jones, Harry Lawtey, Simon McBurney, Timothy Spall and Robert Duvall co-star.  Scott Cooper wrote the script as well as directed and the movie is based on the novel by Louis Bayard.  The Pale Blue Eye hits select theaters in December and will stream on Netflix on January 6th. Check out the trailer below.

Christian Bale Returns to the West with Hostiles (Trailer)