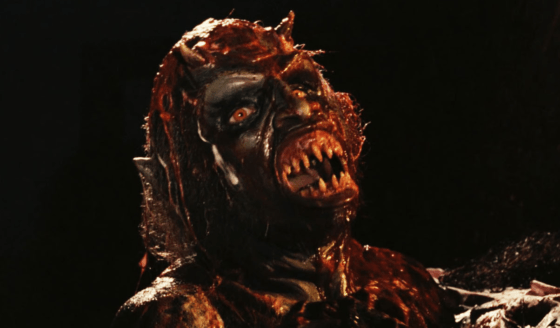 Recently featured on Shudder’s 100 Scariest Movie Moments, Demons is an insane 80s cult classic from Italian director Lamberto Bava.  Coming out in 1985, Demons follows a group of people who have received complimentary tickets to a mysterious new movie.  As the movie begins, things quickly get out of hand as one of the moviegoers turns into a demon after getting scratched on a weird mask in the lobby of the theater and starts attacking everyone else, which turns them into demons as well.  All-out mayhem ensues as the uninfected moviegoers try to escape and survive, all set to heavy metal and rock music from the likes of Billy Idol, Motley Crue, Rick Springfield, and more.  The movie started out as a potential segment for an anthology movie Bava was considering making in the vein of his father, Mario Bava’s classic Black Sabbath but decided he liked the Demons/movie theater concept the best and fleshed it out into a full movie.  The legendary Dario Argento boarded the movie as a producer.  Bava directed a sequel, Demons II, and was working on a third entry but that movie transformed into The Church and became unrelated to the previous two Demons movies.  You can check out all the insanity below, as the full movie is on YouTube.

Everything Action Theater: A Force of One