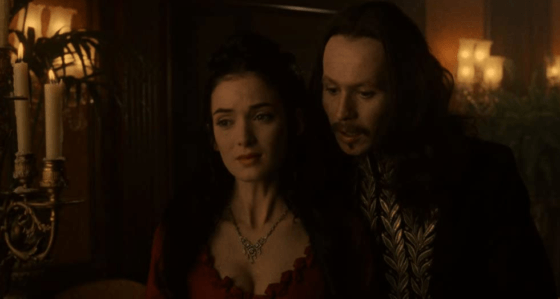 Bram Stoker’s Dracula celebrated its 30th anniversary this past weekend, which seems like the perfect time to highlight its end credits song, “Love Song for a Vampire” by Annie Lennox.  Wojciech Kilar composed the score for the movie, but Lennox’s song was the only vocal track for its soundtrack and matched the movie’s gothic, haunting, romantic style.  The song was a hit in Europe, released as a double A-side with “Little Bird” and it hit #3 on the UK/Ireland charts, #4 on the Spanish charts, and #10 on the French charts.  In the US, it was only on the US Alternative Airplay charts at #24.  The music video was directed by Sophie Mueller and it featured Lennox in a similar setting and outfit to Sadie Frost’s Lucy Westenra from the movie and it also featured clips from the movie.  Check out the video below.