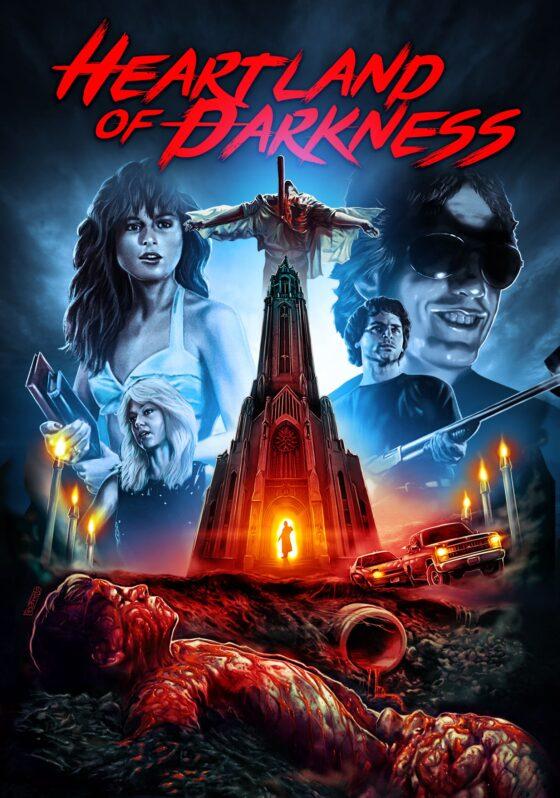 Heartland of Darkness stars Dino Tripodis as yuppy 80s newspaper reporter Paul Henson.  He moves to the small town of Copperton, OH with his teenage daughter Christy (Sharon Klopfenstein) to run the town’s small local paper and escape the hectic life of the city.  Paul soon discovers that things in Copperton are less than idyllic as a satanic cult run by the bloodthirsty local pastor, Reverand Donovan (Nick Baldasare), who has everyone under his thrall and will kill anyone who threatens to expose his plans.  Linnea Quigley plays Julia Francine, a “teacher” at the local high school and, maybe, a witch who helps Donovan with his evil schemes.  Of the main cast, Baldasare and Quigley are the two who understood the assignment the best, gleefully chewing the scenery with their evil scheming and threats and Baldasare is especially goofy and fun when he goes to threaten or kill people with a leather jacket and sunglasses over his priest outfit and flanked by his gang of muscle-bound goons.  Tripodis gets a couple of good yelling freakouts and action-hero one-liners as the movie progresses but most of the cast feels like local people around whatever small town they filmed in who haven’t really done any acting before.  The movie would definitely have benefitted from a cast of colorful, wacky characters around town who all turn out to be Satanic cultists in more of a Hot Fuzz kind of way.

Heartland of Darkness was shot in the 80s on 16mm film and it definitely feels a bit low-budget and cheap most of the time.  There is a couple of fun, gory moments, most notably the gruesome bodies of victims of the Reverend and some heads getting blown up by shotguns but it definitely could have used more craziness, more gore, and more ridiculous action.  This unfortunately isn’t a lost gem like Miami Connection or Dangerous Men where it’s almost non-stop over-the-top insanity from the first moment on.  Heartland of Darkness is kind of slow a lot of the time with some glimmers of bad movie highlights here and there and a fairly decent, ridiculous finale.  If this were Red Letter Media’s Best of the Worst, I definitely would not choose this one as the Best.   Watching the trailer above or a similar supercut of the best scenes a la Everything is Terrible would probably give you all the best scenes and save you some time watching the entire movie.

I really wished Heartland of Darkness was a Miami Connection-level hidden gem but it’s mostly just a forgettable, low-budget 80s horror movie that probably could have stayed lost.  There are some scenes or characters for fans of bad B-movies and Linnea Quigley and Nick Baldasare are carrying the movie with their gleefully over-the-top sinisterness but there’s not enough craziness to make it a truly fun watch.  If you do want to check it out yourself, it’s out now on Blu-Ray with a ton of bonus features.