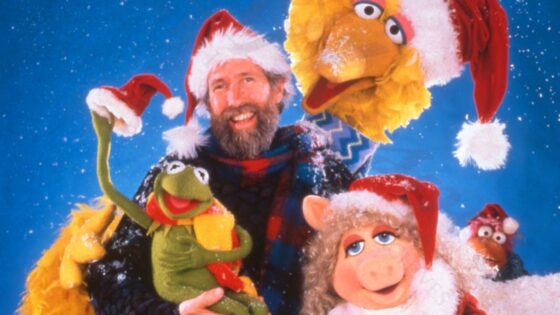 In 1987, A Muppet Family Christmas brought together The Muppets, Sesame Street, Fraggle Rock, and Muppet Babies for a one-of-a-kind holiday special in the Jim Hensonverse.  The special follows The Muppets as Fozzie Bear brings them to his mother Emily’s farmhouse.  Unknown to Fozzie, Emily has decided to leave and spend Christmas in Malibu, letting Doc and Sprocket from Fraggle Rock rent the farm for the holidays.  Big Bird and the Sesame Street gang arrive as carolers and Kermit and his nephew Robin discover a Fraggle hole and the Fraggles in the basement of the farm.  Jim Henson himself makes an on-screen appearance toward the end of the special, fully bringing everything full circle.  Many Christmas and holiday staples were sung during the special, although licensing saw some of them removed from VHS and DVD releases of the special, as the songs were only licensed for TV broadcasts.  The special was well received at the time, ranking 24th overall in the ratings when it aired and it has subsequently been considered by many critics and outlets as one of the best Christmas specials of all time.  You can watch the entire special below thanks to YouTube.

Everything Action Theater: A Christmas Dream