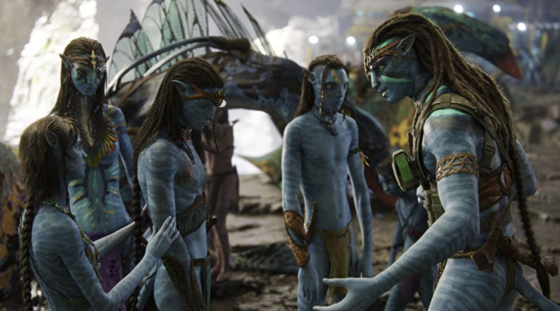 Avatar: The Way of Water stayed far above the competition over the Christmas holiday weekend while another star-studded movie, Babylon, crashed and burned similar to Amsterdam earlier this year.

The Way of Water took in another $64 million over the weekend, dropping 52% from last weekend.  This brings the movie up to $261.6 million domestically and over $863 million worldwide for two weeks out.  The original Avatar only dropped $2 million between its opening and second weekend but there are factors like Christmas Eve being a slow movie-going day in general and a massive snowstorm that swept across much of the northern part of the country late last week.  The Way of Water is still ahead of its predecessor by just under $50 million domestically and is basically dead even with it after two weeks if you adjust for inflation.  Either way, The Way of Water is doing well so far and if it continues to hold and build word of mouth, it should have a massive final tally, although possibly not the biggest movie of all time.

In a distant second was Puss in Boots: The Last Wish, which performed the best of the new holiday weekend releases in theaters.  The Last Wish took in $12.4 million over the weekend and has $18.5 million total domestically and $51 million worldwide.  It is the lowest opening in the overall Shrek franchise and less than half of what the original Puss in Boots spin-off movie made back in 2011 but it could hold with kids being out of school for Christmas/winter break.

I Wanna Dance With Somebody, the Whitney Houston biopic, took third place with $4.7 million for the weekend domestically and $7.3 million worldwide.  That is way below other recent big musical biopics like Elvis, Bohemian Rhapsody, and Rocketman, which all made $25+ million in their openings and it’s even below movies like All Eyez on Me, the Tupac biopic that seemed to come and go fairly quickly back in 2017.  The movie did get an A Cinemascore, so it could maybe be a slow burn going into the new year.

Babylon took fourth with a weak $3.6 million domestically, which is around half of what the similarly star-studded Amsterdam opened to in October this year, which also co-starred Margot Robbie.  Both movies cost at least $80 million to make and both will most likely lose their studios money, in Babylon’s case that would be Paramount. It’s one of the lowest openings ever for both Margot Robbie and Brad Pitt and the lowest opening wide release ever for director Damien Chazelle.

Violent Night rounded out the top 5 with another $3.5 million, bringing it to $41.9 million domestically and $62.9 million worldwide.  Universal made the movie available on PVOD for the holiday weekend but it still only dropped 30% from last weekend.  We’ll have to see if nosedives now that Christmas is behind us.

Further down the list, The Whale expanded wide and moved up to 7th place with just over $1 million, bringing its domestic total to $2.5 million.

IFC’s Corsage took the Per Theater average with $16,000 in each of the 2 theaters it played in over the weekend.