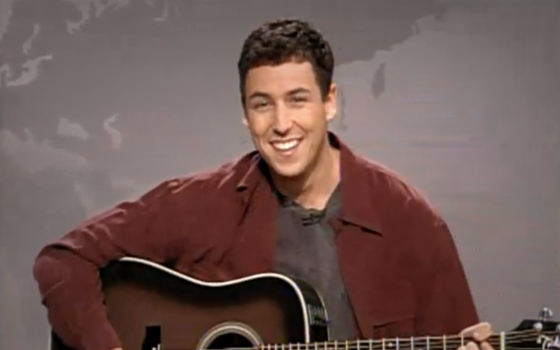 It’s the final night of Hannukah tonight, so it seems like the perfect time to highlight Adam Sandler’s classic, “The Chanukah Song”.  First performed on SNL on December 3rd, 1994 during Weekend Update, Sandler made it a staple of his stand-up act and comedy albums.  The song has seen multiple updates through the years, with the latest being Part IV from 2015, which Sandler performed at the Judd Apatow & Friends festival in New York City.  The song goes over the basics of the Hannukah celebration and then runs through a list of celebrities who are Jewish or Jewish adjacent, like David Lee Roth, James Caan, Bill Goldberg, William Shatner, Leonard Nimoy, Jack Black, Henry Winkler, Ben Stiller and more.  Each version changed up the celebrities mentioned and updated the references.  The original version was included on Sandler’s 1996 album, What the Hell Happened to Me?, and released as a single, peaking at #80 on the Hot 100 and #25 on the Adult Top 40.  You can watch the original performance from 1994 below.