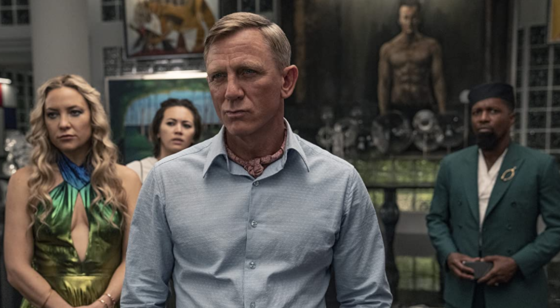 When Knives Out opened in 2019, it gave the world Daniel Craig’s Benoit Blanc, a wonderfully southern-fried detective full of colloquialisms and an eye for details.  Three years later, Blanc is back for another mystery in Glass Onion.

Taking place in 2020 and acknowledging all the horrific insanity of that year, Blanc is languishing in quarantine without a mystery to solve.  An opportunity comes in the form of an invitation to the private Greek island of billionaire Miles Bron (Edward Norton), who also invites his inner circle; Governor and Senate hopeful Claire Debella (Kathryn Hahn), fashion designer and model Birdie Jay (Kate Hudson) and her assistant Peg (Jessica Henwick), scientist Lionel Toussaint (Leslie Odom Jr.), streamer Duke Cody (Dave Bautista) and his girlfriend Whiskey (Madelyn Cline) and former partner in Miles’ company, Alpha, Cassandra “Andi” Brandt (Janelle Monae), who was ousted from the company in a messy and bitter court battle.  Miles plans to have a “murder mystery” weekend but a real murder occurs and Blanc has to work to figure out what is going on.  Much more is happening in Glass Onion and it lives up to its title with the clever peeling back of the layers of the plot.  The first half sets up lots of motives and potential opportunities for one crime but the second half reveals there is a deeper scheme at play and the movie goes back to scenes and adds another layer to each one, making what seemed like say, the motivating factor for someone wanting another character dead being something else entirely.  I don’t know if it’s quite as clever as Knives Out, where it revealed mostly what happened in the first few moments of the movie and then had our main character, played by Ana De Armas, racing to keep Blanc from finding out.  Glass Onion is still insanely clever and it all builds to a fantastic payoff and comeuppance for certain characters.  The movie is also very “of the now” and it does a great job of commenting on current topics, like problematic celebrities, men’s rights activists, out-of-touch billionaires, and alternative energy.  It all feels organic to the characters and never like Rian Johnson is lecturing but I wonder in a few years if it will seem weird or lose some impact as it’s so tied to current events.

Much like the ensemble of the first movie, the cast of Glass Onion is fantastic, led by a truly hilarious and wonderful Daniel Craig.  Craig gets to flesh out Blanc more, as we see some of his home life, and he does a great job of highlighting Blanc’s true excitement at finally being able to leave his apartment and take on a case and not get beaten in games like Among Us with some of his famous friends. You can tell that the weight of Bond is off his shoulders and he’s free to relax and have fun and he gets to really lean into the southern charm of Blanc and his chamber room dramatic reveals. The rest of the cast does a great job of selling the history of their relationships and it feels like they’ve been “friends” for years, with inside jokes and a casual back and forth between them.  Dave Bautista and Kate Hudson are stand-outs and are the most over-the-top personalities and have a ton of the laughs, like the increasingly terrible reveals of what Hudson’s Birdie has tweeted or done in public. Janelle Monae is also fantastic and gets to show off more layers and has much more to do as the movie progresses and is a great counterpart to Blanc in a similar but slightly different way that Ana De Armas was in Knives Out.  I do think there could have been a little more from Jessica Henwick and Madelyn Cline as Henwick, much like The Gray Man earlier this year, doesn’t have a lot to do except be mostly the straight person to Hudson’s antics and there’s one hilarious scene that shows the secret depth of Cline’s exterior as arm candy but it doesn’t really come up again.

If you enjoyed Knives Out, Glass Onion is another fun mystery with a fantastically clever plot and great, fun performances from the cast.  Daniel Craig seems like he has an absolute blast playing Blanc and hopefully, there are many more mysteries for him to solve in the future.

Where to watch Glass Onion: A Knives Out Mystery

A Murder Mystery Game Gets Real in Glass Onion (Trailer)

Everything Actioncast Ep 594 “House of the Dragon, Rings of Power, Glass Onion, Unsolved Mysteries and More”