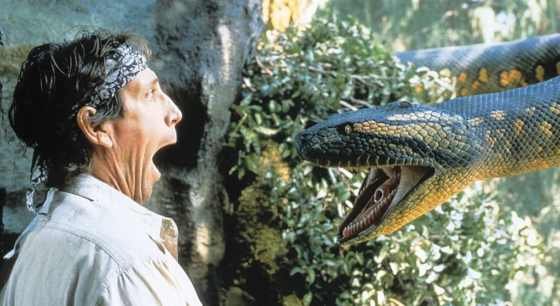 Arriving in 1997, Anaconda is a cult favorite among bad movie connoisseurs for its ridiculous premise, wild cast of characters, and crazy deaths.  Featuring an ensemble that includes Jennifer Lopez, Ice Cube, Jonathan Hyde, Owen Wilson, Kari Wuhrer, Danny Trejo, Eric Stoltz, and Jon Voight (who is doing one of the most insane accents in movie history), the movie follows a group of National Geographic documentarians find their trip hijacked by Voight’s Paul Serone, who forces them to help him on his hunt for a massive anaconda.  The anaconda has other plans and soon everyone in the group is getting devoured or killed in some other fashion.  The movie was critically panned but a huge success financially, making over $136 million worldwide and it spawned four sequels, including a cross-over with fellow ridiculous 90s creature feature, Lake Placid.  You can watch the 1997 original below thanks to YouTube.

Where to watch Anaconda