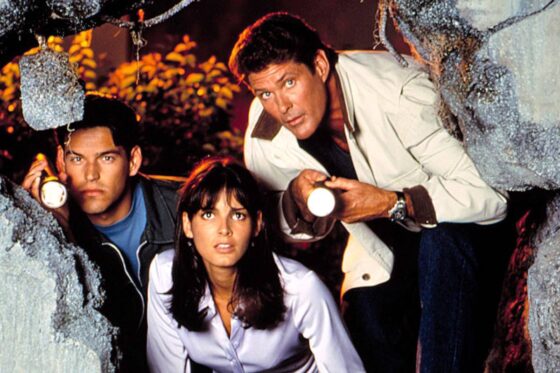 One of the weirdest spin-offs in TV history, Baywatch Nights saw David Hasselhoff’s Mitch Buchannon moonlighting as a private eye and, eventually, investigating bizarre supernatural cases.  Baywatch Nights debuted in 1995 when the main Baywatch series was in its sixth season and it ran until 1997 for two seasons.  The first season found Mitch teamed up with police friend Garner Ellerbee (Gregory Alan Williams) and detective Ryan McBride (Angie Harmon) to investigate ridiculous but still somewhat grounded cases, like kidnappings, stalkings, robberies, and murders.  Facing fading ratings heading into season 2, the show decided to try and emulate another massively popular 90s series, The X-Files, and things got truly insane as aliens, vampires, sea monsters and more begin to terrorize the beach.  The series was canceled after season 2 and the Mitch returned to normal lifeguard duties for the rest of Baywatch’s run, bringing Donna D’Errico’s Donna Murphy with him, who was introduced in Baywatch Nights.  While the main series is widely available, including a 24/7 channel on platforms like Pluto TV, Baywatch Nights exists only with a DVD in Australia from Shock Entertainment but you can watch the first episode below thanks to YouTube.

Where to watch Baywatch

Life’s A Beach in the First Baywatch Trailer