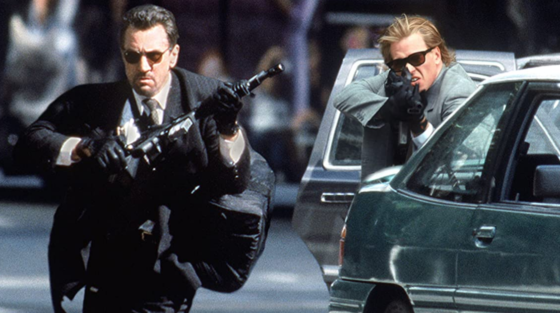 One of the greatest, if not the greatest, heist/crime movies ever made, you can watch Michael Mann’s 1995 masterpiece Heat in the latest Everything Action Theater.  Based on his earlier TV movie LA Takedown, Heat brought together some of the biggest names at the time in its ensemble cast, including Al Pacino and Robert DeNiro.  Pacino plays LAPD detective Vincent Hanna, whose squad is hunting down a team of bank robbers pulling off increasingly elaborate heists around the city.  DeNiro plays Neil McCauley, the leader of that heist crew who is looking for one last big score so he can get out of the game for good.  Val Kilmer, Jon Voight, Tom Sizemore, Wes Studi, Amy Brenneman, Ashley Judd, Natalie Portman, Xander Berkeley, Mykelti Williamson, Ted Levine, William Fichtner, Danny Trejo and Dennis Haysbert co-star.  The characters played by Pacino and DeNiro were based on real people, Chicago detective Chuck Adamson and thief Neil McCauley who spent time locked up in Alcatraz, and the pair had a similar cat-and-mouse relationship.  The movie opened behind Jumanji and Toy Story in December of 1995 but it has since become regarded as one of the greatest movies ever made and the inspiration for later movies like The Dark Knight and games like Payday and the Grand Theft Auto franchise.  A sequel/prequel novel, Heat 2, was published last year, co-written by Mann, and he intends to make it into a film.  You can watch Heat below thanks to YouTube.

Where to watch Heat