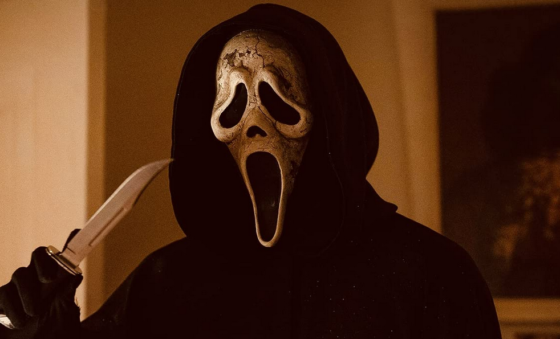 Ghostface is out of Woodsboro and in New York City for the sixth entry in the Scream franchise, hitting theaters this March.  Melissa Barrera, Jenna Ortega, Jasmin Savoy-Brown, and Mason Gooding, the new survivors of last year’s Scream, are in the Big Apple but a new killer in a Ghostface mask is stalking them and racking up a new body count.  Courtney Cox returns as Gale Weathers and Hayden Panettiere is also back from Scream 4 as Kirby Reed.  Dermot Mulroney, Henry Czerny, Samara Weaving, Tony Revelori, Jack Champion, Liana Liberato and Josh Segarra co-star and are new additions to the Scream franchise.  Last year’s Scream was pretty great and the directors of that movie, Radio Silence aka Matt Bettinelli-Olpin and Tyler Gillett, are back for this one with long-time Scream screenwriter Kevin Williamson as an executive producer.  Scream VI is out on March 10th and you can check out the trailer below.

Ghostface Returns in 2022 for Scream (Trailer)