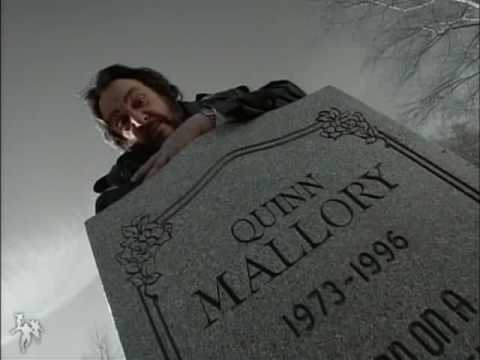 Welcome to Season Two of Sliders where we got a brand new title sequence and the quickest cliffhanger wrap up in television history.  So let’s get right into it.

Into the Mystic begins with Quinn having a crazy nightmare where the rest of the gang is apathetically attending his funeral.  Wade is making out with Ryan and Rembrandt and Arturo are more concerned about getting something to eat than eulogizing Quinn.  The dream ends with Quinn bursting out of the ground like a zombie yelling at them to come back.  What’s really going on is that the Sliders are still on the Earth they got to at the end of “Luck of the Draw”, where Ryan managed to remove the bullet from Quinn’s shoulder and then decided he wanted to stay, and asked Wade to stay with him.  She declined and Ryan vanished the next day, presumably with Henry the dog.  With Quinn mostly healed, the gang slides out to their next world.

Unfortunately, the rough landing of entering the world agitates Quinn’s wound to the point that he almost passes out so the group hustles to find a doctor.  Most of the phone book is sorcerer’s but Rembrandt manages to find a Dr. Xang and they head out to his office, which is heavily Asian influenced, as is much of the architecture of this Earth.  Dr. Xang is an extremely creepy, ghoulish physician, who turns out to be a witch doctor his certifications and eye chart reveals.  After doing his witch doctor thing he doesn’t do much to fix Quinn’s shoulder but does seemingly cure his headache.  Xang wants $266, which the Sliders are unable to spare so they skip out on the bill.  They do have enough money for a room at the Dominion Hotel however, where each room features cable TV and a real skeleton in the closet.  The gang is also awakened by the sound of chains scraping down the hall.  The open the door to find a grim reaper standing in the doorway, who serves Quinn with a subpoena, as Xang is suing him. Did I mention this Earth is one where science and medicine has been replaced by mysticism, witchcraft and sorcery?

Quinn and Wade try to get the help of huckster lawyer, Ross J. Kelly, previously seen way back on the Pilot episode as a normal TV lawyer on Earth Prime and a Communist interrogator on Communist Earth.  Kelly tells them they’re in deep trouble as there’s nothing he can do as Xang’s an accredited shaman and the law states he can  take any body part he wants if Quinn defaults.  The body part in question is Quinn’s brain and bounty hunters will soon be in pursuit of the gang.  Their only hope is the mysterious and powerful Sorcerer, whose company produces pretty much every product on this Earth, but there’s almost no way to get an audience with him.  The gang is doubly convinced to find the Sorcerer when a fortune teller tells them he’s a slider and can get them home.

The gang takes a cab to the outskirts of San Fransisco, where they have to cross the Golden Gargoyle Gate Bridge, actually a fairly solid rope bridge.  Wade seems to be terrified of heights and Rembrandt isn’t too eager as well but Quinn leads the way until halfway across when the bridge seemingly ends in mid-air.  Quinn, noticing a peculiar way the moonlight is refracting, figures out that the rest of the bridge is still there, but some sort of optical illusion is making it seem to be gone.  The group crosses the rest of the bridge and finds the Sorcerer’s opulent castle.  They tell the guard at the front desk that they need to see the Sorcerer and after waiting for hours, are denied entry by the Sorcerer’s executive assistant Mr. Graham.  Quinn tells him that they’re Slider as they’re being escorted out and the Sorcerer’s voice announces that they are to be allowed in.  The gang enters an empty room where the Sorcerer reveals himself as some sort of floating apparition who claims to have slid between worlds for centuries.  The sorcerer tells them he will help them if they return to Xang’s office and steal some blueprints for him.

The gang really has no choice as, right after leaving the castle, Quinn is captured by a dwarf bounty hunter and returned to Xang.  The others demand he be released and Rembrandt is able to steal the bounty hunter’s shotgun while Wade distracts Xang.  Quinn finds Xang’s archives and the blueprints, which are for sliding technology.  Rembrandt has to shoot Xang’s pet cobra and then manages to knockout Xang when he tries to attack the gang with a sword.

The gang heads back to the Sorcerer’s castle but are denied yet again by Mr. Graham, who tells them they’ll hear something from the Sorcerer in about a week.  Quinn doesn’t take this for an answer and rushes to the Sorcerer’s chamber while Arturo restrains Mr. Graham.  In more Wizard of Oz references, Quinn finds the “man behind the curtain”, whose actually another double of Quinn.  Alternate Quinn is actually a really nice guy who got trapped by the growth and power the Sorcerer’s company gave him.  Mr. Graham was also selling secrets to Xang and is immediately fired.  Alternate Quinn slid onto this world and saw the potential to sell people things they actually needed instead of Xang and his fellow witch doctors/voodoo artists mystic bullshit, so he started importing things from alternate Earths and selling them under the Sorcerer label.  With the combined effort of Quinn, Arturo and Alternate Quinn, the gang might finally have the coordinates to get back to Earth Prime.

The gang slides out and winds up in front of what looks like Quinn’s house.  Unfortunately they have less than a minute to try and figure out if they are really back or not.  Rembrandt is puzzled by the news stories in the paper but Quinn tells the group that if the gate squeaks, they’re back, since it’s been squeaking since he was 12.  The gate is as silent as a tomb and the gang dejectedly slides out.  In a fantastic twist however, it’s revealed that Hank the handyman oiled the gate’s hinges and the group actually was back home.

Overall, a great Sliders episode.  They quickly dispense all the b/s from the Season One finale and everything is back to typical Sliders adventuring.  The setting details are really good in this episode as well, like Xang’s witches alphabet eye chart, the phone book advertising almost nothing but sorcerers, and the overall gothic/occult atmosphere.  That twist ending is fantastic as well.