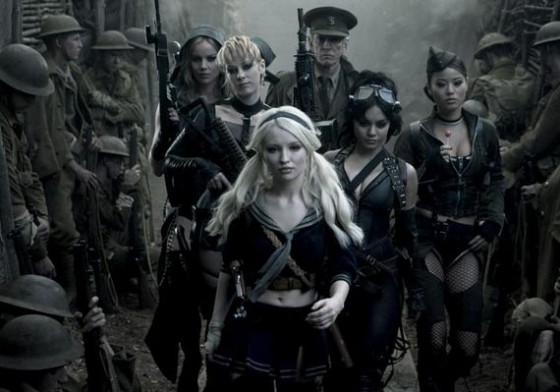 After seeing the amazingly edited trailers and the prospect of Zack Snyder’s first foray into an original movie, everyone was excited to see just what the hell Sucker Punch was going to be.  Disappointingly, it turned into a movie with amazing action sequences but in every other respect, it’s pretty terrible.

The “plot”, ostensibly, is that “Babydoll” is committed to an insane asylum by her evil stepfather after she accidentally kills her sister trying to kill him.  Stepdad pays off one of the orderlies to forge some signatures so that Babydoll will get a lobotomy in five days when the brain surgeon comes.  Babydoll meets some of the other girls and plans an escape which requires four items they will have to steal from around the hospital.  However, the plot is muddled by the fact that Babydoll imagines the hospital as a burlesque club and further imagines that whenever she dances, she goes to these fantastical battlegrounds.   Unlike say, Inception, which was brilliantly edited so that you could easily keep track of where the characters were, Sucker Punch is incoherent and inconsistant about what’s real and what’s not (obviously the crazy battlegrounds aren’t real).

Speaking of the battlegrounds, the real positive aspect of the movie is the action sequences.  Babydoll and crew fight their way through a WWI battlefield where the Germans have reanimated their dead soldiers into steampunk cyborgs, a siege of a medieval castle which houses a pair of dragons and a futuristic train that is carrying a bomb guarded by robots.  The special effects during these sequences are amazing and the detail of the battlefields is incredible.  These sequences are a crazy mish mash of what seems like every video game, anime and comic book that Zack Snyder has read and crammed into this movie.  You’ll see a giant mech fight in the aforementioned steampunk cyborgs, A dragon chase a B-12 bomber and giant samurai wielding mini guns, it’s insane but awesome.  The action also features plenty of Zack Snyder’s trademark slow motion, which I enjoy because it makes certain things seem more visceral, but I can also see if you are annoyed by it.  The battle field sequences are far too short however and they also feel like video game levels, the only thing they’re missing is an announcer or pop saying “Stage 1 Complete”.

When the girls aren’t engaging in insane commando missions however, the movie comes to a screeching halt as the lack of acting talent, plot or even characterization leads to excruciatingly long scenes of girls crying while terrible cover versions of cult rock songs play.  Snyder seems to think that to have emotional depth, you have to have your characters constantly breaking down at the slightest things, which also undermines the “girls kicking ass” empowerment that Snyder says he was trying to provide with the movie.  All the girls are pretty much there to look hot and/or be a stereotype with the only exception possibly being Abbie Cornish as Sweet Pea, who is the only character is who is given a shred of character development and history.  I did enjoy a brief cameo from Jon Hamm and also Scott Glenn as the girls sort of “dream commander/mentor”

I think the main problem with Sucker Punch though, is that, in it’s efforts to be a clever, alternate reality mind bender, it renders all it’s crazy burlesque drama and fantastical fantasy action completely worthless when you stop and realize that this is a) happening all in Babydoll’s head and b) is to pick pocket a few common objects for the girls escape.  For instance, the girls are attacking a train to get a bomb code named “Kitchen Knife” which is in reality, an actual kitchen knife that the girls are trying to steal from the disgusting hospital cook who is distracting by Babydoll’s dancing.  I don’t even know if Babydoll actually dances to distract people in “reality” since the whole dancing thing is like level 2 of her dream world.  Basically, the whole thing kind of falls apart if you stop and think about it and it has a fairly standard “twist” at the end that was original when the Twilight Zone did it 50 years ago.

I think what happened is, with no restraints, Zack Snyder just want crazy with all the visual aspects of the movie and things like plot and characters sort of became an afterthought.  It’s definitely my least favorite Zack Snyder movie (Well I haven’t seen Legend of the Guardians), even behind the extremely flawed Watchmen, but hopefully he’s able to learn from this and come back better than ever with Superman and whatever else comes down the pipe.