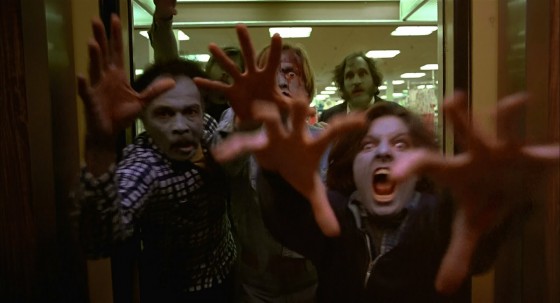 The first post-Professor episode is an OK take on the zombie genre with “Sole Survivors”.

The Sliders arrive on the zombie infected Earth after escaping from an unknown situation on a previous Earth that had Quinn tied to a cross, which Quinn hints had something to do with the locals seeing the Sliders arrive through the wormhole.  Almost immediately, Quinn is bitten on the thigh by a zombie but, with no knowledge of what’s going on, isn’t too concerned about it.  The gang sees bodies everywhere and they eventually make it to a warehouse that seems to be inhabitated, or at least safe with it’s barb wire fence and safety lights.  Wade sees signs of a flashlight inside.  There are warning signs on the fence warning that it’s electrified but Quinn wagers that the survivors wouldn’t waste any unnecessary power and tests the fence.  He fakes getting electrocuted, which earns a laugh from the other Sliders, even Maggie.  The gang scales the fence and goes to investigate the warehouse.

The gang finds a bunch of plants and herbs growing but Maggie thinks the place is abandoned and questions that Wade saw anything.  They get into a catfight with Maggie calling Wade soft for crying about the Professor and Quinn and Rembrandt defending Wade’s toughness.  It seems like Maggie’s chief personality quality is “bitch”.  Wade is proven right when they see more flashlight flashes in another room and Quinn and Maggie go to investigate.  They find a survivor named Debra.  Learning that Quinn is bit, she immediately writes him off as dead, explaining that he’ll quickly become one of the infected.  Her boyfriend was bitten and turned and bit Debra on her stomach, but she is apparently immune.  Refusing to give up on Quinn, the Sliders make a deal with Debra that if she shows them how to get to the nearest hospital, they’ll come back and help her repair her generator.

Arriving at the hospital, the gang quickly learns that everyone has either died or left.  Quinn’s condition quickly gets worse as he’s develops the infected’s sensitivity to light and green eyes.  Not wanting to put Wade and Rembrandt in danger, Quinn tells them to go back and help Debra while he works to find a cure.  He wants Maggie to stay with him for the unspoken job of putting down Quinn if he can’t find a cure.  Wade and Rembrandt decide to go to the next closest hospital and Remy fixes up an abandoned jeep.

At the hospital, Quinn worsens and is sedated while stumbling down the hall by another survivor, Dr. Tassler.  He and Maggie lock Quinn in a room and Maggie learns that the company responsible for the zombie outbreak is Geni-Trax and their weight loss supplement Lipron.  Lipron was a bacteria that attacked fat in a person’s body and an antidote was supposed to be taken to kill the bacteria once the desired weight loss was reached.  However, something went wrong and people started to crave fat and eventually started attacking and eating others to get more fat.  Dr. Tassler himself was infected but he managed to regulate the bacteria with massive doses of the corporate antidote.

At the next hospital, Rembrandt and Wade manage to gather a bunch of medical supplies and also a research packet about the infection.  They have to fight off a hungry zombie but make it back to the city before their jeep kicks the bucket.  Back at the hospital, Quinn manages to slip out when Dr. Tassler and Maggie return to his room to give him more sedative.  Debra’s generator goes out and a swarm of zombies burst in, including Quinn.  Debra manages to scare off the other zombies with a wall of flame from an oil barrel but Quinn jumps the flames and manages to fix the generator.  He takes a sample of Debra’s blood and then heads back to the hospital where Dr. Tassler injects him with the corporate antiodote just in time before he completely succumbs to the infection.  Dr. Tassler works through the night and manages to create what he thinks is the cure from Debra’s blood.  Maggie and Quinn go to meet Rembrandt and Wade outside for the slide but learn that Debra has been captured by a group of zombies that came out of the sewer.  The gang follows and manages to beat down the zombies and rescue Debra.  Dr. Tassler inoculates the rest of the Sliders and he and Debra decide to remain and start curing people rather than sliding with the Sliders.

Sole Survivors is an OK episode that’s a competent take on the zombie genre.  It definitely doesn’t do anything too original (although the source of the infection is pretty clever) and the zombie effects are definitely hampered by the mid 90’s TV budget.  There’s surprisingly no mention of Rickman but it might just be that they were scrambling to cast Roger Daltrey’s replacement.  The show seems to be going out of it’s way to make you hate Maggie, every thing she says is delivered with pure bitchiness.  I do sort of love that it take Wade 5 seconds to figure out what Quinn wants to do with Debra’s blood while it take Maggie what seems like a few hours to come to the same conclusion.  Next week, the Sliders pay homage/rip off “Species” as Maggie gets infected with a horny alien parasite.