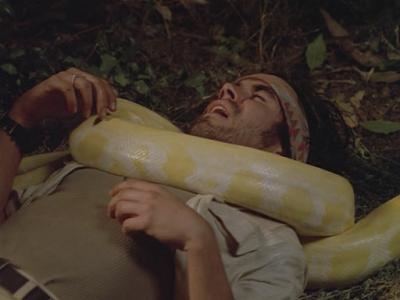 This week’s episode of Sliders is a perfect example of how far the show had sunk from it’s smart, sci fi roots as it only exists as a cross marketing tool for Anaconda, released at the same time this episode originally aired in 1997 and also featuring Kari Wuhrer.  The plot feels like something that would have been rejected by 80’s shows like The A-Team or MacGyver as it involves snake poaching and drug cartels.

In a completely illogical move, Quinn and Rembrandt are on a separate vacation from Wade and Maggie in what would be Southern California on our world.  Apparently the search for Rickman isn’t a major priority and the guys aren’t worried about something happening that would make them not be able to link back up with the girls for the slide.  It just so happens that something does come up when the guys are bumped from their flight back to San Fransisco and the next flight isn’t till the following Wednesday, a week after they have to slide.  Fortunately there is a charter flight leaving immediately and the guys go to see if they can catch a ride.  The woman who booked the flight, Kyra, is reluctant to have the guys hitch a ride but the decision is made for everyone when a pair of jeeps with armed goons drives onto the runway and Kyra and the guys jump on Kyra’s plane and escape.  The guys learn that Kyra is a reptile expert who is transporting a pair of rare Triadder snakes back to the States for a medical company to research their venom, which might be able to cure Parkinson’s disease.  Unfortunately during the shootout, one of the locks on the snake cases was damaged and the male Triadder escapes and kills the pilot, causing the plane to crash in a swamp.  Quinn, Rembrandt and Kyra are OK and manage to get a brief mayday message out before their radio shorts out.  The trio decides to head to the nearest town and Rembrandt and Quinn reluctantly agree to bring the surviving Triadder female (still in it’s case) along as well.

Back in San Fransisco, Wade and Maggie return from their vacation and find out about the guys having to hitch a ride with the charter flight.  They learn that the charter wasn’t heading to San Fransisco Airport but to an airfield in Delgado, a country that is where Los Angeles would be on our world and is a humid, jungle controlled by tobacco cartels (tobacco being illegal on this world).  After negotiating with a charter flight of their own, the girls manage to rent a plane and head to the Delgado airfield and meet Carlos, who claims to be a friend of Kyra and has conveniently gotten a truck ready to go out and look for her and invites the girls to join him.  Carlos has to deal with a shady looking Australian man before they head out though and we learn that Carlos is not a good guy as he accused our Australian mate of trying to cut him out of the snake deal and then stabs and kills him, unbeknownst to the girls.

Back in the jungle with Quinn, Rembrandt and Kyra, the trio stumbles into an illegal tobacco field and accidentally sets off a warning flare that alerts a pair of guards.  Quinn manages to ambush one by jumping him from a tree and the male Triadder, who is seemingly following the trio, strangles the other guard.  Armed with AK-47s, the trio continues on their way to town, but when they get there, the townspeople are extremely unwelcoming, telling them that the snake they have with them is the Angel of Death and that they must leave.

Maggie, Wade and Carlos make their way through the jungle with Maggie acting like a horny coed around Carlos and Wade being suspicious of him.  When the trio stops for the night, they are attacked by a pair of goons who must have stowed away at the airfield(?) or followed them in the jungle.  Maggie and Wade manage to knock one of the goons out while Carlos kills the other in a nearby pond with his trusty knife.  The trio manages to get to the same town that Quinn, Rembrandt and Kyra got to the previous day and Maggie and Carlos go to get supplies while Wade stays with the truck and looks through Carlos’ bag and finds the severed hand of the Australian and is confronted by the same guy who called the Triadder the Angel of Death.  He tells Wade that Carlos is the devil and Wade runs to find a phone to call the police when she’s attacked by Carlos.  Maggie manages to knock him out and takes his gun and the girls continue down the road.

Quinn, Rembrandt and Kyra meanwhile, managed to find an abandoned tobacco kingpin’s mansion and take shelter in it from the increasing number of snakes that seem to be drawn in by the male Triadder’s hissing.  The snakes crawl into the mansion through the fusebox and water spigot but Kyra refuses to let the female Triadder loose, which pisses off Rembrandt and he gets more pissed when Quinn continues to agree with Kyra.  Quinn even considers staying on this world with Kyra, who promises him that after she sells the snake, they will be set for life.  Maggie and Wade pull up outside the mansion and find it overrun with snakes.  Wade tells Maggie that snakes hate fire so they go into the back of the truck to find some flares and instead find an awake Carlos.  Carlos forces the girls to go ahead and they make their way into the mansion.

Carlos forces Quinn to drop his gun and forces the Sliders back while he tells Kyra to look into his bag and she finds the severed hand.  It turns out that Kyra was going to double cross Carlos and make a deal with the Australian guy to sell the snakes on the black market and keep all the profit.  Kyra manages to weasel her way back to Carlos’ good side by saying that it was all Quinn and Rembrandt’s idea to steal the snake and Carlos is just about to waste the Sliders when the combined weight of a bunch of snakes knocks down the front door and a flood of snakes starts pouring in.  The male Triadder attacks and strangles Carlos but Quinn manages to free the female Triadder from it’s case and the snakes finally start to leave.

The next morning, the gang slides out while they let Kyra take the truck and leave.  She doesn’t get far because, in typical Sliders fashion, she gets her comeuppance when she’s attacked by snakes a little ways down the road.

This episode is like the Jaws: The Revenge for snakes in that it completely abandons any scientific knowledge or logic about snakes.  The Triadder snakes (which in reality are actually harmless Yellow Pythons) are seemingly able to communicate and control all other snakes and the snakes are able to form strategies leading up to the completely impossible feat of knocking a door off it’s hinges.  The background info on how this world is different from Earth Prime is completely throw away as well.  We’re down to the final three episodes of Sliders for this epic Total Recall and next week, the gang gets back on Rickman’s trail as he and they return to the colony world where the gang left the survivors of Maggie’s Earth and find it overrun with dinosaurs.