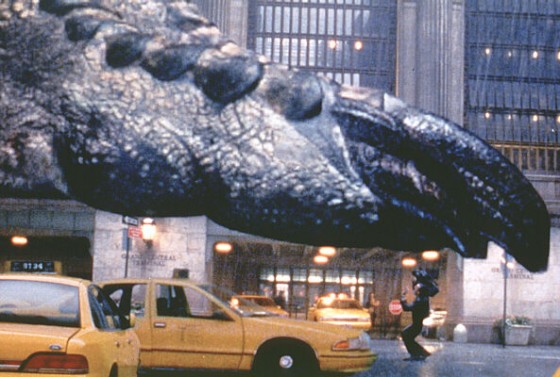 There are great soundtracks, good soundtracks and then there’s soundtracks like 1998’s soundtrack for Roland Emmerich’s infamous and overhyped Godzilla.  Featuring mostly alternative rock from the likes of The Wallflowers, Foo Fighters, Fuel and Rage Against the Machine, most of the songs are not totally offensive but extremely forgettable but one song from the Godzilla soundtrack that has passed into infamy is P. Diddy’s “Come With Me”, which desecrates the Led Zepplin classic “Kashmir”, with the full consent of Jimmy Page.  The music video for the song is seven minutes of insanity as P. Diddy indulges in such things as free falling into Times Square and performing with a full orchestra with minimal interaction with the star of the movie (Godzilla seemingly destroys Diddy’s apartment early in the video).  If you still want to check it out, you can watch the video below.

Bonus Video: Green Day’s Brain Stew Remix from Godzilla (which is a remix only in the sense they added random Godzilla roars to the song)