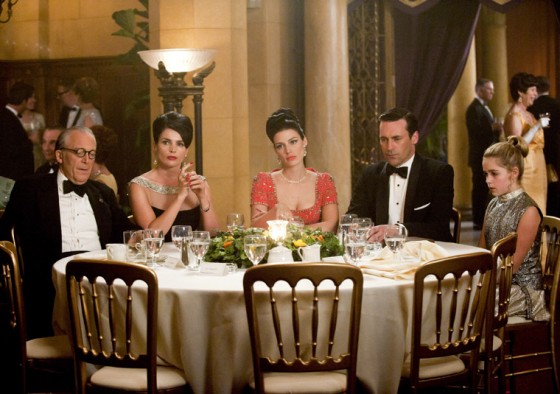 The picture above that you are looking at is one of the final shots in this week’s “Mad Men”. Don receives an award from the American Cancer Society regarding his ad, and invites Megan, her visiting parents and his daughter Sally to the affair. And as you can see, things aren’t really going so well for any of these characters.

We’ll start with Megan’s parents, who are making their series debut. They’re visiting New York City on holiday from Montreal. It’s clear that everything isn’t hunky dory with the Calvets. Megan’s father Emile is struggling to get recognized in the publishing world, while Megan’s mother Marie seems to have a bit of a wandering eye… on Don. Emile’s socialist views clash with Don’s capitalistic profession, causing some other tension as well.

The episode begins though, with Sally chatting on the phone with old pal Glen who is currently away at camp. (Yes! Glen returns!) Sally whines about being her step-grandma Pauline’s slave, and before you know it, Pauline is injured by Sally’s phone cord. With her out of commission, Don takes Sally and Bobby in for the weekend even though they’re hosting Megan’s parents as well.

Meanwhile, the Heinz account is on its last legs. The next day at work, Megan drops a new campaign idea on Don who thinks its fantastic, to the point that he drops whatever Stan and Ginsberg came up with and orders them to run with her idea. Later that night at dinner with the Heinz exec, Megan finds out that they are planning to drop SDCP. Don plans to blow up in his face about it, but Megan calmly retells her story and the pitch. Needless to say, Heinz loves it. Megan has landed her first business.

Peggy Olsen has other business to tend to. She brings her beau Abe to work, but he feels intimidated by her co-workers and decides to leave. Later he presses her to have dinner, giving Peggy the impression that he’s going to break up with her. Seeking advice, she knocks on Joan’s door. Joan spins it around, saying an impromptu dinner date might also mean a proposal. Peggy quickly turns from sad sack to highly optimistic. All dolled up to dinner that night, Abe proposes… that they move in together. While it’s not what she expected or hoped, it’s still a step in the right direction. Later that week, Peggy and Abe host Peggy’s mom and break the news. Her mom dismisses it as “living in sin” and that Abe is only trying to use Peggy.

This sets up the final act of the episode, Don’s award ceremony. This is where things come to a head, both figuratively and literally. Don, Megan, Sally, the Calvets and even Roger attend. It isn’t long before problems arise. Megan and her father bicker about her dreams, tapping into Megan’s reluctant celebration of her Heinz deal. Her father, the socialist, thinks that she is settling with Don the big bad ad man and that she’s abandoning her dreams. She denies it and tries to change the subject, but you know even she’s confused about what she really wants. Roger and Marie exchange glances from afar, and it isn’t before she decided to kick it up a notch. Poor Sally Draper happens to catch them in the act. Yikes.

Don, meanwhile, shares a drink at the bar with Ken Cosgrove’s father-in-law who is also an advertising hotshot. He drops the news to Don that ever since his anti-smoking ad in the New York Times, companies no longer want to work with him. Don is shocked that his bold move has backfired to that effect. It might be that Lucky Strike wasn’t the only casualty from that letter.

Which brings us back to the picture. Sad, forlorn, shocked faces adorn a table at a function meant to celebrate achievement. But no one’s achieved anything, or if they have they are having doubts about it. Megan’s fight with her father only fuels her questioned dreams. Don is dismayed by the ad backlash. And Sally isn’t so sure she wants to act more like an adult. Later that night, she sneaks out to make a call to Glen. “How’s the city?” he asks innocently. “Dirty” she sickeningly replies. And while we know what exactly she’s referring to, it could apply to any of the situations in tonight’s excellent episode.

BAMF: Megan, who’s last ditch pitch resuscitates the Heinz account. Even if she has trouble taking all the credit.

Have a Seat: “Far Away Places”

One thought on “Have a Seat: “At the Codfish Ball””