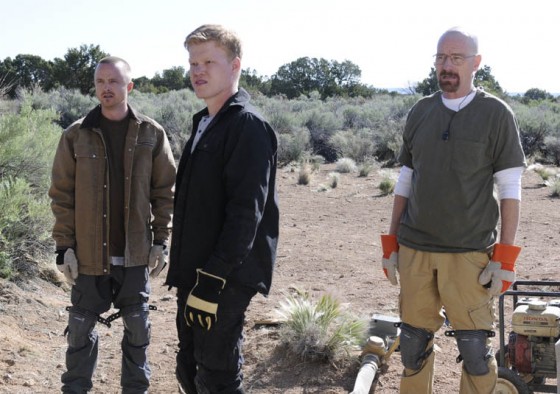 We’ve all see the way power corrupts people on “Breaking Bad”, but one of the more, um… impressive things is how it affects other people. Walt’s “business” has forever changed the lives of Jesse, Saul, Mike, Hank and even his wife Skyler. No one has gotten clean after getting their hands dirty.

Skyler has been consigned to her fate, and she knows it. The whole ordeal with Ted has screwed her up. And with Walt’s miraculous escape at the clutches of ruthless drug kingpin, she’s more scared than ever. She makes a deal with Walt: the kids stay out of the house and she will be his partner in crime for whatever he needs. But as she said herself, she is more like a hostage than a wife.

For Walt, Skyler is the least of his worries. He bugs Hank’s office on a random visit. Here Walt and his crew find out that Lydia didn’t plant the trackers, but the Feds did. And not only one barrel: all of them. There goes their supply of methylamine.

Mike plans to get rid of Lydia, but she saves her own life by spilling the beans about the train that brings in the methylamine. Tons of the stuff. The group comes up with a plan: stop the train with a diversion, pump out the methylamine in an underground tank, pump another tank of water in, and come out clean. The bad supply of watered-down methylamine will be blamed on the supplier from China.

With Mike as the lookout and Walt overseeing the operation, Jesse is helped by Vamanos lackey Todd, who introduced himself to Walt a few episodes back. The heist scene in this episode is tense, but we are left to see what Todd — a wild-card at this point — may or may not do. But alas, the heist is pulled off to perfection. That is until a celebrating Walt, Jesse and Todd are spotted by a random kid on a dirtbike.

At this point, the viewer is as shocked as the three; wondering if this boy is another witness that’ll need to be silenced. Todd does it for us though, by putting a bullet through his chest, at the complete shock and dismay of Walt and Jesse.

But isn’t that what Walt said earlier to Todd? Absolutely no witnesses? Earlier in the episode, Walt and Jesse try to talk Mike out of offing Lydia. Sure, Walt wants a meth empire, but why is death so shocking to him now? Hasn’t he already proved he isn’t afraid of getting his hands dirty?

Now We’re Cookin’… With Historical Counterparts: Another episode, another Jesse James reference. Who will be Walt’s Robert Ford?

Unsung Hero: I’ll be the first to say it. If Johnathan Banks doesn’t get at least an Emmy nod for his work as Mike this season, I’ve lost all hope on TV voters.