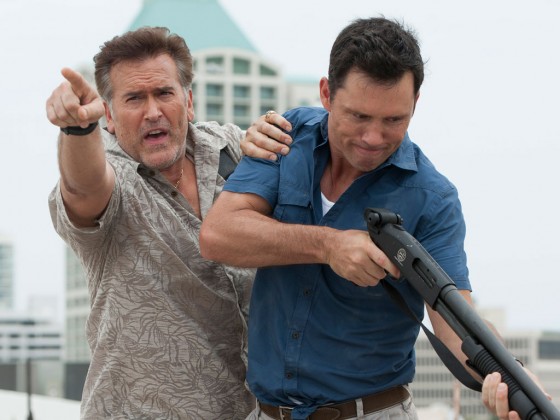 It’s the summer of finale of Burn Notice and Michael and the gang head to Panama to take down Tyler Gray, the man who killed Nate.

With their only lead dead and Gray in the wind, Michael is forced to collaborate with the CIA and Tom Card is surprisingly helpful, utilizing CIA and NSA assets to analyze photos and video until they find footage from a munitions warehouse in Panama that shows Gray breaking in and stealing a number of weapons, including a Barrett sniper rifle.  The CIA gets a facial match at the Newark airport a few hours after Nate’s murder, confirming that it is Gray.  Michael and the gang head to Panama to capture Gray and are met by CIA agent Brady Pressman, who was heading up the Anson capture mission and are given all kinds of high tech gadgetry, including an M110 rifle with an experimental scope, Cornershots, heavy duty body armor and a speed breaching frame.  Brady has a precision plan to snatch Gray but Gray has a plan of his own and somehow finds the group in their abandoned building HQ.  The group barely escapes with a few supplies, and Jesse doesn’t even have shoes on, and manage to get to the roof and jump across to the neighboring building.

Without all the fancy CIA gadgets, the gang is forced to do what they do best, and improvise a bunch of explosives and ammunition, including shotgun breaching rounds made out of broken spark plugs and flash grenades made out of soda cans.  The gang comes up with a new plan but they don’t anticipate how ruthless Gray is, who uses one of his own men to take the full brunt of one of the flash grenades and forces his driver to get out of there at gunpoint.  The gang finds Gray’s Hummer down the road with both of his men dead and Gray set up in a nearby builiding and sniping the group.  Brady takes a round to the leg but, with Fi and Jesse distracting him, Michael and Sam manage to get to the roof and Michael rappels in and takes down Gray.  All is not as it seems, of course, and Gray reveals that Card hired him to kill Michael and this mission was supposed to be a suicide mission.  Michael calls Card and confirms that he is lying and the group just barely manages to escape the area before an F-18 flies in and blows up the building they were in.  The F-18 comes around for another run at the van the gang is in and Brady sacrifices himself so the group can escape.  Now our quartet, and Gray, are stuck in Panama with a mercenary army and a corrupt CIA officer gunning for them.

While the gang is in Panama, Sharon Gless goes for her Emmy nomination next year as Madeline first rips on Michael before he leaves, saying it’s everyone’s fault Nate is dead and that she should have protected him from Michael and later she goes to the CIA to talk to Card and convinces him to let her see the file on Nate’s murder and he tries to comfort her by explaining how two brothers in the same environment could come out so different and how proud he is of Michael, even as he is sending an F-18 to blow him up.

Overall, it was a pretty great summer finale.  The mission in Panama was great and showcased how the gang is able to take the barest amount of supplies and somehow make them work.  I loved the running joke of Jesse having no shoes, John McClane style.  There were a couple of belief stretching scenes, like the group barely getting a running start to jump across a wide gap of one roof to another, but there’s a ramp so that gives them the boost they need and also that Gray, instead of escaping, kills his men and hides in a building, even though he should still have an army of mercs working for him.  I am completely on board with John C McGinley being the new recurring villain and I’m interested to see how the gang will escape Panama with absolutely no resources.  I could take or leave the Madeline scenes, everything with her is usually pretty heavy handed but the scenes in this episode took it to a new level.  We’ll see you back here in November for the second half of the season.