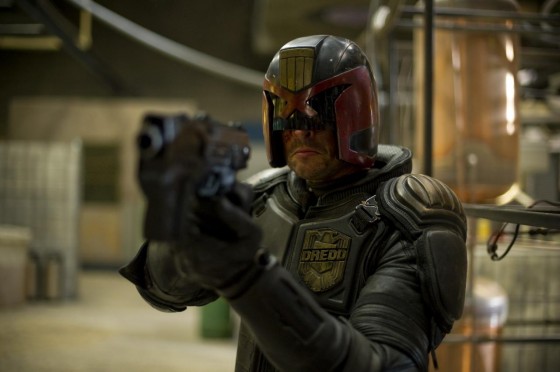 Judge Dredd is a name that everyone knows of but few people are familiar with. For most people with a general knowledge of pop culture, specifically comics, music, and movies, Judge Dredd is probably a character whose image they’d recognize, but wouldn’t be able to take it further than that. Most people, unfortunately, would recall the lackluster Judge Dredd film of the 1990s starring Everything Action forefather Sly Stallone and immediately write the character off as silly, dated, or irrelevant. Enter Dredd 3D.

Dredd 3D, in simple terms, does for Judge Dredd what The Amazing Spiderman did for Spiderman, albeit under different (but sort of related ish) circumstances. Where The Amazing Spiderman was a more comic-based adaptation of old web-head, its main purpose was to reestablish the character on film through the reimagining of his entire universe. Things are a little more sci-fi/fantasy, Peter Parker is more of a depressed outcast, and Spiderman, ultimately, is a kid—not a man. Though arguably not the best film in the Spiderman franchise, it is certainly the most authentic and inherently “Spiderman” of them all. Dredd 3D follows suit in that it is undeniably everything a Judge Dredd movie should be, even if it isn’t perfect. Don’t get me wrong though—Dredd 3D does just about everything right.

Dredd 3D doesn’t pussyfoot around with backstory or character development. From the offset, we are treated to a voiceover by Judge Dredd (Karl Urban) himself bringing us up to speed: Mega City One, a post-apocalyptic future-wasteland runs the length of Boston to Washington DC. Inside the walls of the city (the outlands are nothing but irradiated deserts and, as we’ll hopefully see in a sequel, home to all sorts of baddies), the only thing keeping some sort of order are the Judges of the Hall of Justice. For the uninitiated, Judges, in order to expedite (see: do away with) due process, serve as police officers as well as judge, jury, and executioner if need be. Dredd is the most revered and feared of all the Judges. When Dredd and a unique rookie, Anderson (Olivia Thirlby), respond to a call at a notorious mega-complex riddled with Slow-Mo (a future drug that slows time down exponentially for the user), they encounter the ruthless Ma-Ma clan, led by (you guessed it) the sinister Ma-Ma (Lena Headey), who puts a hit out on the Judges to protect a secret hidden within the walls of the complex—the key to Ma-Ma’s power and control.

The pacing of the film itself is fantastic. It never drags, nor does it feel like it’s moving too fast. Well done there. Similarly, the tone of the movie is spot-on: Mega City One is a barren wasteland and though it is immediately recognizable as a post-apocalyptic future city, it never feels cliché. Mega City One looks exactly the way it is supposed to. Then there’s the question of the Judges themselves. For my money, I don’t want the Judges looking like Power Rangers, nor do I want them to be so high-tech that it detracts from the whole post-apocalyptic aspect. Pretty much, the Judges retain the classic look that we all know and love, while making the outfit look realistic, semi-futuristic, and tactical. After all, what good is the uniform if it can’t stop (or at least slow down) a bullet?

Speaking of classic, Karl Urban’s portrayal of the iconic Judge Dredd is absolutely spot-on. Of course, the screenplay by Alex Garland, which shows clear respect for and knowledge of everything that makes the character so great, certainly helps matters. But back to Mr. Urban. He is Judge Dredd. From the perpetual scowl and stoic body language to the amount of stubble and degree of gravel in his voice, he nails it. Judge Dredd’s voice does not change: no emotion, no fear, no excitement—just cold precision. Some might say that there’s no range, but they’re missing the point. To express what must be expressed without any apparent expression is essential to the character.

Like I said, Dredd 3D is not without its flaws. The 3D, for instance, while impressive, is used like a running gag from an episode of Family Guy, with sequences exaggerated to take way longer than they should, more frequently than they should. I am reminded of the episode of South Park that parodied 300—Mr. (Mrs.?) Garrison pouring coffee in slow-mo—in this film’s use of 3D. Visually, it was pretty. Stylistically, it was kind of gimmicky. It’s also going to make for some awkward 2D home-viewing. Last but not least, the character of Ma-Ma, played by Lena Headey, left a little bit to be desired. Not only was her character development completely rushed and generic, but the performance itself felt a little subdued. Though Ma-Ma is clearly crazy, we usually see it in her brutality and lack of emotion. I am sure that this was a creative choice and not because of Ms. Headey, and it certainly wasn’t bad, but for a movie with so many strong points, even the decent aspects will look bad in comparison.

Last but not least, Dredd 3D is brutally violent. Bodies explode on impact after being dropped from silly heights, bullets tear through flesh, bone, and face in slow-motion, and a lot of shit blows up. Sounds perfect, right? It is. It’s bloody, savage, and precise in its violent, but never overkill. The violence serves the purpose of developing Judge Dredd as a character, but, more importantly to the story and the universe that this film has created, establishing his authority and brutality.

All in all, Dredd 3D certainly does justice to the character traits, spirit of the source material, and over-the-top violence that put Mega City One’s most notorious Judge on the map. What I found particularly admirable about this film was the approach of the filmmakers—they didn’t try to water down what Dredd is really about, nor did they try to use Dredd as a character in a story that he really didn’t belong in. There’s no need to show us Dredd’s backstory or his years in the academy. We don’t need to know what makes him tick—that can be explored in later entries in what I hope becomes a series. What we needed was for Judge Dredd to be established as a mega-badass that both the criminals and citizens of Mega City One should fear.