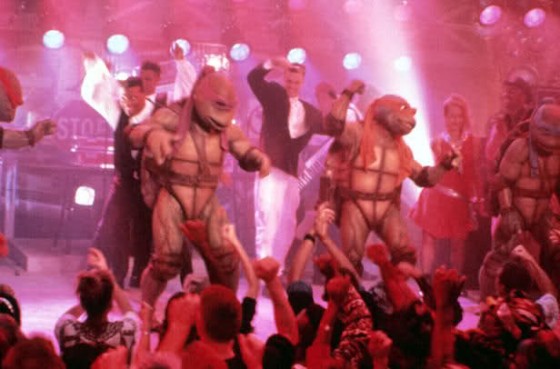 Don’t worry everyone, we’re not talking about “We WishYou a Turtle Christmas” or “Coming Out of Their Shells” where the Turtles sing horrible attempts at holiday and rock music but instead, the music surrounding the Turtles, specifically from the first two movies.  Right off the bat, the Turtles had a very hip hop/rap/street vibe going so it was only natural that they got two of the biggest rap stars of the early 90’s for the soundtracks of the first two movies.  MC Hammer drops This is What We Do on the first movie’s soundtrack and Vanilla Ice upped the ante with his infamous cameo in the second movie where the Turtles crash into the dockside club he’s performing in and he is immediately able to come up with a new song inspired by them.  There’s also Turtle Power by Partners in Kryme and, of course, we have to feature the classic theme song for the cartoon.  Check out all the videos below.

“This is What We Do” by MC Hammer

“Turtle Power” by Partners in Kryme