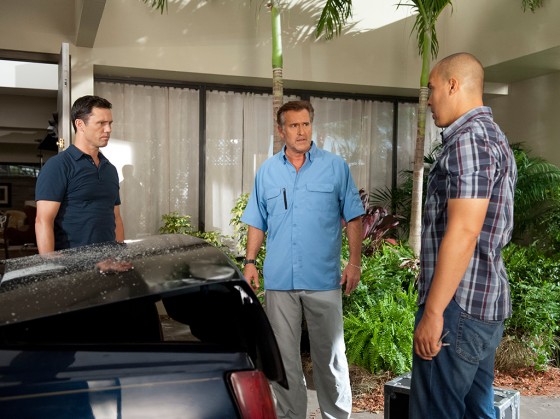 A seemingly cursed, and expensive, electronic alarm breaker throws a wrench in the gang’s escape plans this week on Burn Notice.

The group is still hiding out at Calvin Schmidt’s (Patton Oswalt) condo as he tries to get the gang new identities but his identity maker jacks up the price and it’s going to cost the gang a little under $1 million to get passports, tax returns, credit history and more created for them.  To raise the funds, Jesse and Fi head to Schmidt’s warehouse, still under police guard as a crime scene, and steal a remote circuit breaker that Schmidt has a buyer willing to pay a cool $1 million for.  Schmidt tries to grab some booze on the way out and alerts the cops with a broken bottle, forcing the gang to escape on a forklift through the wall.  The circuit breaker gets shot up during the escape and is rendered inoperative, and none of the group has the technical knowledge to repair it.  Fi and Michael cover up the damage and get it to fake operating status so that Schmidt can make the deal with Thorne, a local thief.

The deal, of course, does not go as planned and Schmidt forces Sam to enter the deal as Professor Charles Finley, the man who designed the circuit breaker and Thorne forces Schmidt and Sam to first go to a nearby pharmaceutical company and prove the circuit breaker works, which it does after Fi, Michael and Jesse manage to break in and get to the alarm and shut it down.  Thorne then changes the deal again by forcing Sam and Schmidt to accompany him and his crew to the real heist stealing diamonds from a nearby convention center.  Luckily, there is a listening device in the circuit breaker, so the rest of the crew knows exactly what will go down and Michael is able to rescue Schmidt and torch the gang’s getaway van while Fi and Jesse pick up Sam, who uses a hidden gun in the circuit breaker to take Thorne hostage and force the rest of crew to ditch their guns.  The cops, who are literally right down the street, arrive and arrest Thorne and his gang.  Sam, thinking ahead, had Thorne put Schmidt’s money for the circuit breaker in the van so the group manages to get the funds for the fake IDs.

Meanwhile, Michael has Maddie meet up with Barry, the group’s money launderer, to set up a number of fake money transfers so the CIA while be scrambling to find the group while they go in the opposite direction.  Barry raises red flags by cancelling all his manscaping appointments right before the transfers start, so the CIA arrives and arrests him and, although she escaped, they find Maddie’s cigarette butts, placing her at the scene and now on Riley’s hit list as well.  Michael and Fi meet with her shortly after and they convince her to come with them when they flee the country.

When You’re A Spy: Psychological Warfare

When You’re A Spy: You Can Run

When You’re A Spy: Odd Man Out