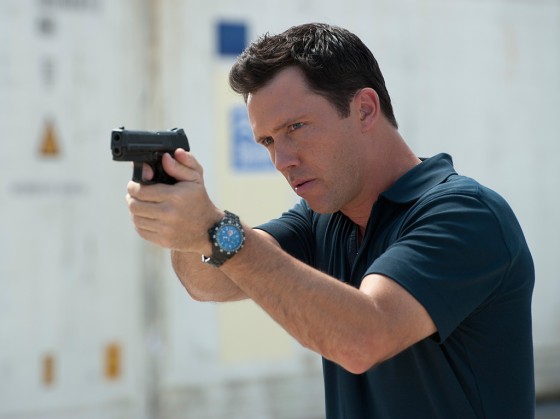 The season finale of season six of Burn Notice is upon us and it was full of twists and turns but wasn’t as seemingly game changing as previous season finales.

Picking up from last week, Michael learns that the mysterious flowers and note left at Nate’s grave was from his old frenemy, Jason Bly.  They built up a grudging respect of each other after being held hostage together in a bank and Bly has alternately tried to help or take down Michael.  Bly is also sort of Internal Affairs for the CIA and is working on the investigation into Tom Card.  He offers Michael a deal that if Michael comes in as his chief witness, he will make it easier for the rest of the group.  Michael tells him he’ll think about it but the gang is still going with their original plan to escape to various countries with their new IDs.  To finalize this plan, Michael, Jesse and Sam head to the local shipping yard to secure positions on an outgoing freighter but Riley got to the yard manager first and a tactical team swarms in.  Jesse is captured and Sam is shot but Michael manages to capture the tactical team member who did the shooting.

A pair of tense interrogations occur on both sides with Riley tempting Jesse with the file he’s been trying to get for years that reveals the identity of his mother’s killer while Michael tries to break Dean, the tac team member but ultimately lets him contact Riley so they can use Schmidt’s tracking equipment to get the location of Riley and Jesse.  They had brought in Fiona’s ex, Campbell the paramedic, to help Sam, and they have him get them a sedative that they use to pump in to the warehouse and knock everyone out and then pull Jesse out.    When they get back to Schmidt’s, Sam’s condition has worsened so they need to get him to a doctor.  Fi knows a doctor who lost his license for some shadiness, Dr. Jed, and they hightail to his house for emergency surgery.  Dr. Jed manages to get the bullet out and stabilize Sam, although there is a tense couple of minutes when you think Sam might actually die but the fans would riot if Bruce Campbell left the show, so Sam pulls through.

The group decides to stay at Dr. Jed’s but a hit squad shows up that the team discovers is from a drug cartel they went against for the CIA.  They realize Riley has cracked and now wants them dead or alive, so they have to take the fight to her.  Sam proposes that they bring him to the hospital, which will draw out Riley.  They distract her and Fi can slip a bug into Riley’s car.  Sam will rile her up, forcing her to contact the cartel and they can nail her.  The distraction while Fi puts the bug on the car is Michael driving a dirt bike through the hospital and crashing out the front window.  Riley sets up a meet with the cartel and the gang heads there with Bly to get the evidence.  They some damning audio and pictures but it all literally goes up in smoke when a marina security guard on the cartel’s payroll tosses a grenade into the car, killing Bly and destroying the evidence.  Michael won’t give up and decides to board the cartel’s yacht, which Riley is on, and end it one way or another.  Fi and Jesse provide some cover fire while Michael jumps into the ocean and swims to the yacht.  Michael takes out the security and he and Riley face off on the bridge.  Michael has called the Coast Guard and gives Riley two options: give herself up or they both get blown to pieces by the Coast Guard.  Riley finally breaks at the last possible second and calls the CIA to confess.

Three weeks later, the gang has been questioned and held at a CIA facility.  They are finally brought outside to find Michael, in a suit and seemingly now in charge.  He explains he made a deal with the CIA to get everyone released but Fi wants nothing to do with him because he told her he would be done with everything.  It’s not quite clear what role Michael now has in the CIA, he orders around other agents but is he no longer burned or just some sort of adviser.  That’s the question going into next season.

Overall, it’s a pretty good season finale.  There were some great tense scenes, some fun action sequences and it seemingly resolved most of the second half of the season’s conflicts.  The only thing that was kind of disappointing was the ending, we’ve already seen the “Is Michael back in the CIA?” ending before and it was much more effective because all of the sudden, we’re in Washington and Dylan Baker is saying, “Welcome back, Michael”.  This one didn’t feel like the game changer that one was.   We’ll be back next summer for season 7 of Burn Notice, see you then.

When You’re A Spy: Psychological Warfare

When You’re A Spy: Down and Out