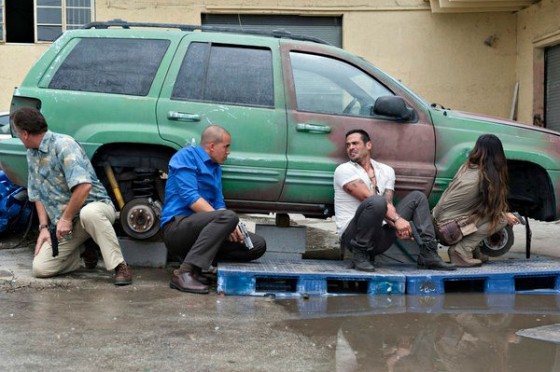 On the 100th episode of Burn Notice, the final season moves quickly to both reunite Michael with his friends and kill off one of the two main villains introduced in the premiere.

Following the events last week, Michael and his CIA superior, Strong, lead a covert team into Miami to try and catch Dexter Gamble, who was questioning Sam, Jesse, Fi and Maddie about Michael’s whereabouts.  Sam and the team are doing their own investigation and Michael learns that Strong has put all kinds of surveillance on them without their knowledge.  The CIA’s plan is to let Michael’s team do the leg work and they’ll swoop in and take out Gamble and then Michael can head back undercover in the Dominican Republic.  The main thrust of the episode is, how long will Michael allow his friends to be watched and put in danger before he finally steps in and reveals himself?  It turns out, right after Fi is snatched by Gamble and taken to an abandoned warehouse that is pretty much impossible to storm without being seen.  Michael claims to have a plan and goes in alone to try and negotiate with Gamble, but he’s really just attempting to get Fi on the phone to reveal a key phrase he knows will get her to duck and cover while the CIA unleashes a hail of bullets into the warehouse, killing Gamble.  The key phrase comes from Michael’s time in Ireland with Fi, something that has been referenced many times on the show but this is the first time it’s actually shown, although it’s a little weird that the show is trying to show how romantic it was but the flashbacks are all shot in an incredibly dark fashion that makes it seem like Ireland is in a state of perpetual darkness.

Overall, it was a solid episode of Burn Notice but a little disappointing as a 100th episode.  There weren’t any Macgyver moments or big action setpieces, except for the pretty excellent climax.  It was also a little disappointing that they killed off Gamble so quickly.  Nick Tarabay was such a wonderfully evil character on Spartacus, that I would have loved to have seen a couple more episodes of cat and mouse between him and the Burn Notice team.  The episode was mostly about how far Michael is willing to go to keep his friends safe and if he’s blown his only chance to have a life outside of the CIA.

When You’re a Spy: Scorched Earth