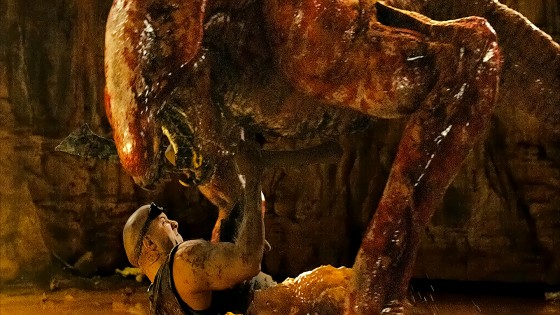 After throwing off most people with a crazy fantasy movie with Chronicles of Riddick, where the galaxy’s most dangerous convict, Richard B. Riddick, fulfills ancient prophecies and fights mystical, undead villains to become the king of a galaxy conquering race, Vin Diesel and director David Twohy reel things in for the third entry in the series, simply titled Riddick.

Picking up an undetermined time after Chronicles, Riddick finds himself on a desolate, dangerous planet after being left for dead by a traitorous group of Necromongers who were supposed to bring him to his homeworld of Furya but instead attempt to kill him on orders from Karl Urban’s Vaako (who unfortunately only has a brief cameo).  After surviving for months, Riddick senses that a dangerous event on the planet is going to happen soon and so he activates a distress beacon that brings two groups of mercenaries with different reasons for trying to capture Riddick.

If you enjoyed Diesel’s portrayal of the uber-bad ass in the prior Riddick movies, you’ll enjoy his performance in Riddick, as it’s more of the same.  He does get to be humanized a bit more as he gets a pet alien dog that he rescues as a puppy and raises during the great opening third that is just Riddick surviving and hunting on this alien world, doing bad ass things like making himself immune to poison and crafting weapons.  The bizarre thing is that he disappears almost entirely from the middle part of the movie, becoming the equivalent of the Predator and striking randomly from the shadows and the focus turns to the two mercenary groups, one led by Bad Boys II villain Jordi Molla and the other led by Matt Nable and Katee Sackhoff.  The former group is much rougher and is out for Riddick’s head while the latter group is after Riddick for more personal reasons, which never really pays off or  justifies the amount of danger they are put into and feels like it’s only there as fan service back to Pitch Black.  The mercs are all kind of interchangeable and are slotted into basic stereotypes like the rookie, the sarcastic one, the grizzled one, etc. and are mainly there to be cannon fodder for Riddick or the creatures who arrive for the Pitch Black style finale.

The special effects and action are solid throughout.  The various creatures Riddick encounters are all well realized and unique, especially the main predators that are in the finale, who are like a cross between a crocodile and a scorpion.  The series returns to a hard R for Riddick, after weirdly going PG-13 for Chronicles and they make some great use of the R rating with a few creative kills, especially what ultimately happens to Jordi Molla’s Santana.  The climax is almost a remake of the finale of Pitch Black, just with better effects, but it’s still satisfying and the movie leaves off on a note that easily leaves room for future movies.  The look and feel of the tech of the Riddick universe is great as well,  combining the lived in tech of a Star Wars or Firefly with more flashy and slick tech from like a Star Trek.

The originality and grit of Pitch Black still makes it the best of the series but Riddick is a close second with a great opening and close but the middle has some issues.  If you’re a fan of the character and the series, it’s definitely worth a look but if you haven’t seen either prior movie, you will not get as much out of it and may be a bit lost throughout.