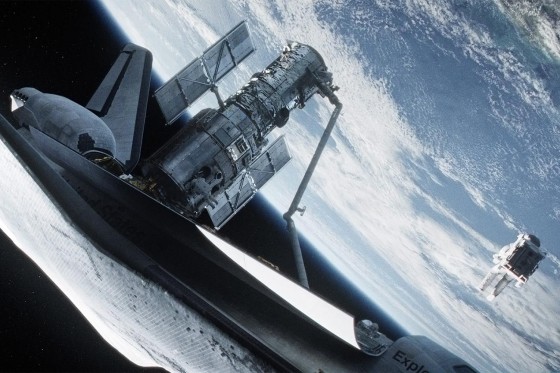 It’s been almost a decade since we last heard from Alfonso Cuaron when he made the incredible Children of Men but the wait was worth it for his latest, Gravity, which is as jaw droppingly stunning visually as it is thrilling.

Sandra Bullock and George Clooney star as astronauts on a mission to upgrade and install a new component onto the Hubble telescope when they learn that a massive field of debris from a failed attempt by the Russians to bring down one of their satellites is heading towards them and they are unable to get back into the shuttle before it is destroyed and they are left adrift with no communication and seemingly no way home.

Sandra Bullock is basically placed into a position like James Franco in 127 Hours or Tom Hanks in Castaway where it’s essentially a one person show as George Clooney exits the film about halfway through.  I haven’t been the biggest fan or even seen some of Bullock’s most recent movies but she is incredible in Gravity, making you feel every second of her fear and making you care enough to want to see her somehow get out of her situation.  The only thing I wasn’t fully on board for was the fact that they give her a tragic backstory involving her daughter and that she might possibly might not want to live anyway that I think was similar, and much better done, in The Grey from last year with Liam Neeson’s character.  George Clooney is at his most charming as he tries to reassure Bullock and balances out her fear with a joking manner, telling stories about past Mardi Gras and excited to be able to break the untethered space walk record.

If you’ve ever seen an IMAX movie about the International Space Station or Hubble, imagine visuals on par with those but with those satellites exploding and the astronauts struggling to survive.  I don’t know how Cuaron and his team achieved the visuals, as most of it has to be CG, but how they placed Bullock’s and Clooney’s face into the space suits in a way that is completely believable and the physics and feeling of space seem spot on with tears turning into globs and floating away and fire going out of control in the super high oxygen environment of a space station. There is also incredible sound design as the absolute silence of space is replicated to great effect in the movie.   Cuaron’s choice to have the debris field come back every 90 minutes (not real time) in the movie lends it a constant sense of dread and it always comes back right when you think things might work out for once for Bullock.  The movie also wastes no time as it’s only about 90 minutes and you have barely 5 minutes or so of down time before things get intense again.

If you have an IMAX 3D theater near you, Gravity will probably melt your brain with it’s visuals but even in a normal theater, even if it had the worst plot ever, the visuals are so jaw dropping, you have to go see it and especially if you’re a fan of survival movies like The Grey, Castaway, 127 Hours, etc.  It’s definitely one of the best movies of the year.