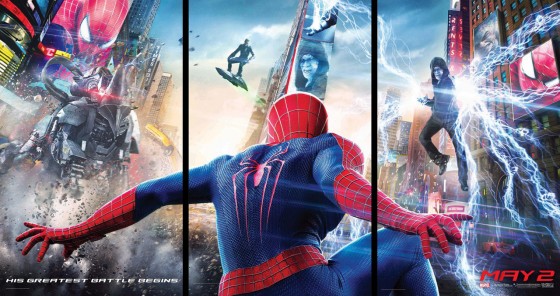 The Amazing Spider-Man was a pretty solid reboot that had a few glaring plot holes that made it not quite live up to the heights set by Sam Raimi’s first two Spider-Man movies.  Amazing Spider-Man 2 is kicking things off next summer and looks like it’s going all out in terms of action and villains.  After taking down The Lizard in the first movie, Peter Parker (Andrew Garfield) is taking on new threats like Rhino (Paul Giamatti) while learning even more secrets about the mysterious and dangerous projects Oscorp has been working on, including finding a secret lab his father left behind.  Harry Osborn (Dane Dehaan) arrives and puts a number of new projects into motion, like turning a mild mannered Oscorp employee into Electro (Jamie Foxx) and turning himself into the Green Goblin.  Hopefully the villains are more balanced than they were in Spider-Man 3 but if nothing else, the action looks absolutely spectacular, like the final shot where Spidey and Electro are battling in a electrical plant.  The movie is out May 2nd and you can check out the trailer below.