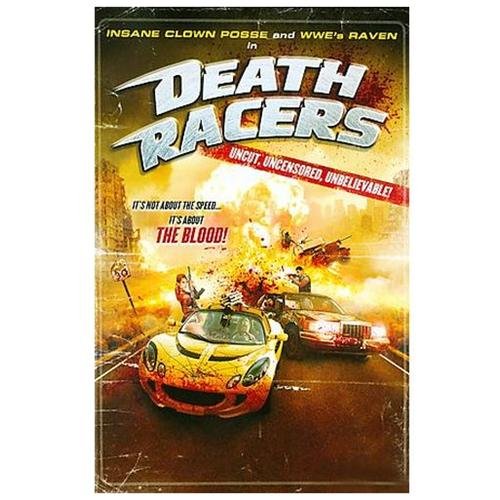 With Jason Statham’s remake of Death Race hitting theaters, The Asylum got the next best thing to Statham, The Insane Clown Posse, in the seemingly copyright infringing Death Racers.

Insane Clown Posse?: Yup, I kind of want to know if The Asylum sought them out or if they had the idea and it worked out to be close to the Statham version coming out.  Here’s how the ICP is introduced in the futuristic world of the movie.

Who are the other teams in this Death Race?: Isn’t it insane that they just straight up call it Death Race, basically begging Universal to sue them.  The other teams are SHG or the Severed Head Gang, who seem to have come out of a bizarro universe Robert Rodriguez movie (and one of them gets their head exploded before the race even starts), Vagina-Myte, a pair of crazy lesbians who apparently seduced and killed at least 70 men and Homeland Security, a pair of roided out soldiers who were discharged for some reason.

And what’s the goal of this race?: I will give credit to Death Racers that it’s actually closer to the original Death Race 2000 in that the teams are competing for points they earn by killing bystanders.  All of the bystanders in this are prisoners in the “Red Zone”, the Escape from New York style mega prison that was set up after a vague war happened.  The ultimate goal is to capture or kill The Reaper, the insane leader of the Red Zone, who is played by WWE wrestler, Raven. 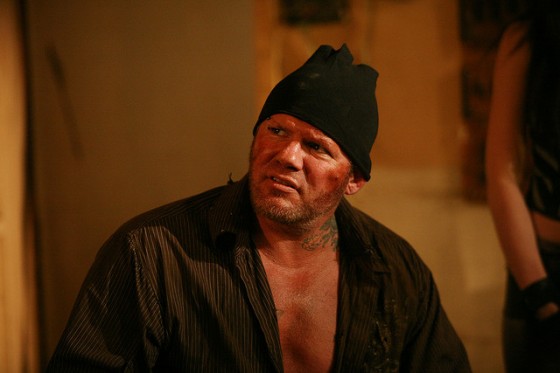 What’s this Reaper done to get the ICP sicked on him?  Well, he has a scientist and he’s forcing him to create Sarin gas to dump into the water supply of, I guess, the entire world.  The create the Sarin from dead bodies because, science?  It’s also apparently incredibly explosive.

How’s the racing in this Death Race?: God awful, there is literally one scene where all four cars are driving around a backlot somewhere in Los Angeles at about 20 mph, “rampaging” and killing prisoners.  The action is so slow, stunt guys are literally jumping onto the hoods of the cars and smearing fake blood on them to try and show the “vicious impact”  The best part is probably when ICP hits a guy and drives him into a meat grinder built into the front of their ice cream truck.  The rest of the movie finds the team rolling up to abandoned buildings, fighting some prisoners, exchanging one liners and then moving on.  There’s also a cyborg for no reason. 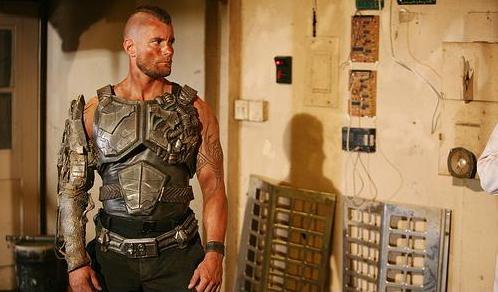 Is it as violent as Death Race (remake or 2000)?:  You know, I will give this movie credit as well that it feels the most Troma of all the Asylum movies I’ve seen so far, with terrible beheadings and fake blood spraying everywhere.  I think it’s actually self aware of how stupid it is as well; there’s the fake news covering the event with “Harvey Winkler” that with better writing could have been a Robocopesque satire.

So who wins this thing?: Technically Homeland Security, who it’s revealed faked their deaths in an explosion and have been allowing the other teams to clear out the area until they got to The Reaper.  They were also secretly working directly with Governor Black, who organized the Death Race, the whole time.  HS blows up the lab with ICP and The Reaper in it and then find only the Reaper’s hand, so they take it as a trophy and celebrate their victory with the Governor.  ICP and The Reaper both survived though and Shaggy 2 Dope goes off to take down the Governor because Violent J has a giant piece of wood embedded in his leg.  Shaggy attacks the Governor and the Governor activates the explosives in ICP’s necks.  Violent J’s head explodes next to the barrels of Sarin, apparently blowing up the entire country.  Double Dee Destruction, the only surviving member of Vagina-Myte, is the only who apparently survives the explosion. 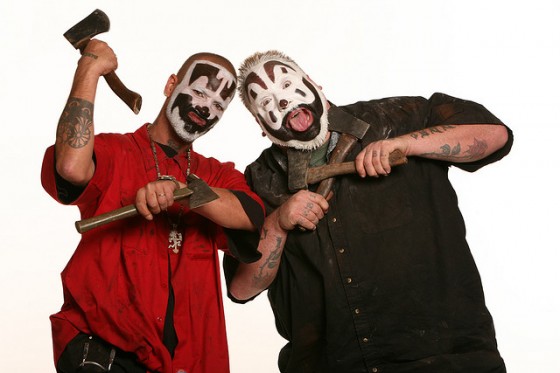 Is it worth watching?:  If you’re a Juggalo and you haven’t seen this, then probably.  ICP has the best vehicle, the best one liners, the entire soundtrack is ICP songs and they also destroy the entire world, so there you go.  Everyone else, stick with Death Race 2000 and the Statham version.  Even the two sequels to the Statham version are actually pretty decent, with solid vehicular action, Danny Trejo and Ving Rhames.

Next Up: The Asylum unleashes their own Cloverfield monster with the simply titled Monster.