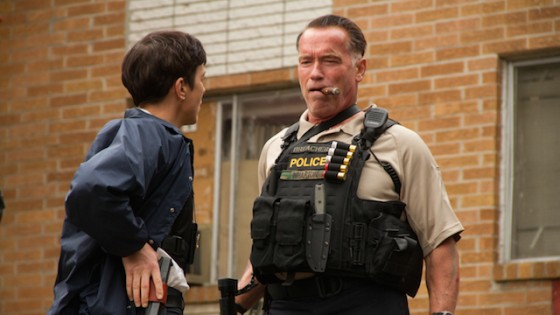 Arnold Schwarzenegger, our patron saint, returned to starring roles last year with The Last Stand and Escape Plan and he’s followed it up this year with his first of three movies, Sabotage, but, unfortunately, he’s not off to a good start.

Sabotage, directed by purveyor of dark police drama David Ayer, follows an elite DEA team, led by Arnold as John “Breacher” Wharton.  Following a major cartel bust, Breacher and his team attempt to steal $10 million in drug money but it’s stolen before they can recover it.  After surviving 8 months of investigation, the team is reinstated but they start getting killed one by one.  An Atlanta detective, played by Olivia Williams, starts to investigate the murders and it seems like the cartel is looking for revenge, or are they?  The major flaw that brings down pretty much everything else in the movie is that everyone is a gigantic, douchey asshole.  Arnold is the most likeable of the bunch but still does some shitty things and it just goes down hill until you get to Mirelle Enos’ raging cracked out bitch, Sam Worthington’s paranoid asshole and Joe Manganiello’s roided out jock dick, just to name a few.  Max Martini is one of the most likeable because he’s killed first.  If you’re supposed to feel bad or worried for them as they start to get killed, the movie is an absolute failure.  I haven’t spent this much time with such despicable characters since Pain & Gain last year.  Ultimately, you don’t care what happens to anyone and the investigation gets more and more implausible as it goes along.

One warning sign right away that we might be in trouble is that you realize that the trailer was an absolute lie.  It sets up a plot where Arnold has to go rescue his wife and son from the cartels but in the first five minutes, it’s clear his wife and son are dead and then you’re stuck in this grim, unfun crime thriller for an hour and a half.  When the characters shut up and focus on their jobs, the action is actually really well done and there are a few great shootouts, but they are few and far between the scenes of either the characters acting like douchebags or going off on grim monologues.  I will say the final scene is actually great and if the movie had been a better build up to that sequence, this may have gone down as a classic in Arnold’s catalog but, as is, the movie is kind of a slog, and an especially gruesome one.  It definitely earns it’s R rating but it’s not fun, over the top R rated like you would expect from an Arnold movie.  It’s all horrific crime scenes and autopsies, which is fine if it didn’t feel like they were only there for shock value and you cared at all about the plot.

It’s painful to give an Arnold movie a bad review but the movie is an unfun mess with some of the most terrible characters I have ever seen.  If hanging out with the douchiest dude bros for 2 hours sounds like a good time, go see Sabotage but even hardcore Arnold fans should probably pass and check out The Last Stand or Escape Plan instead, or just watch Commando for the 50th time.