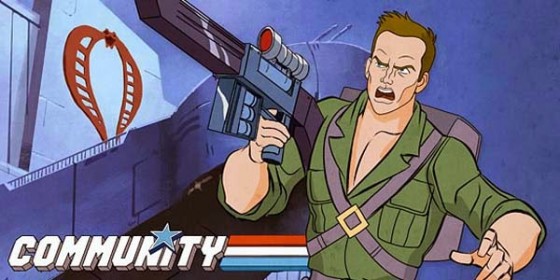 After a pretty terrible Season 4 that is hence forth known as the “gas leak” year, this season has brought the show back to it’s hilarious, great self with Dan Harmon back behind the scenes.  There’s a bunch of great episodes so far but they outdid themselves last night with an insanely funny and dead on parody of GI Joe with “GI Jeff”.  The entire gang is turned into member’s of the secret fighting force with Jeff becoming Wingman, Annie becoming Tight Ship, Britta becoming Buzzkill, Shirley becoming Three Kids and Abed becoming Fourth Wall.  After Jeff breaks the most sacred law of the GI Joe universe and kills someone, Fourth Wall reveals that nothing is real and they are two Inception style levels away from the real world and they must journey to the ruins of a place called Greendale to find the truth.  On the Cobra side of things are Dean Pelton as the Vice Assistant Cobra Commander, Hickey is Major Dick, Duncan is Zim Zam and Chang is Overkill.  What’s great is that the gang is interacting with the actual GI Joe characters like Duke, Flint, Scarlett and Destro.  There are also pitch perfect toy commercials in the episode as well that get weirder as the episode goes on and, as always, there’s something deeper going on than just a love of cheesy 80’s cartoons.  Check out the entire episode below, courtesy of Hulu.