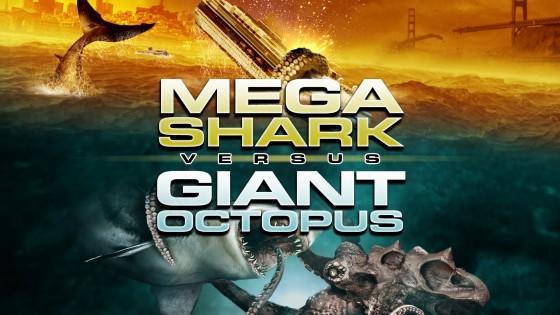 The Asylum hit on a formula in 2009 that would serve them well until they would hit the peak of ironic popularity with Sharknado.  Sharks have become The Aslyum’s biggest stars, whether mega, mecha or somewhere in between and this is where it all started, Mega Shark vs Giant Octopus.

No C. Thomas Howell?: I know, we’ll all miss him but now we have the Renegade himself, Lorenzo Lamas and 80’s mall superstar Deborah Gibson to battle these undersea titans.

How does this battle start?: Well, Debbie Gibson, who is some sort of marine biologist, steals an experimental submarine to study a pod of whales in the Arctic Ocean but the army just happens to be testing some sort of sonar device at the same time.  The sonar causes the whales to go insane and start ramming against an ice shelf, which releases Mega and Giant from their frozen death grip on each other.  Instead of instantly fighting though, they immediately swim off in different directions, leaving no one to believe Debbie Gibson about what she saw.

If they don’t fight, where do they go? Well, Giant Octopus heads toward Japan, possibly hearing about their love of tentacles, and destroys an oil rig:

Mega Shark one ups him though with possibly one of the greatest scenes in cinema history:

Wow, Mega Shark has some mad ups: He certainly does and he seems to also to be able to grow in size as well because he’s basically Godzilla size later when he escapes a trap in the San Fransisco Bay and eats part of the Golden Gate Bridge (it also might be that no one cared about editing/continuity) 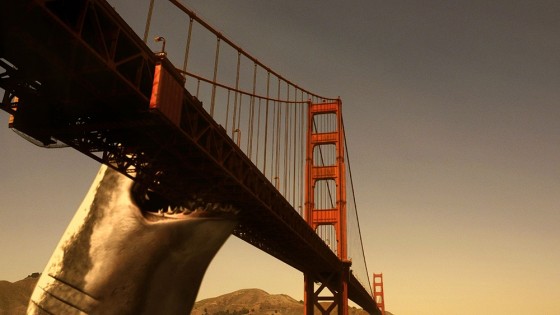 So how does The Renegade factor into this?: He’s a special government agent that basically kidnaps Debbie Gibson, her mentor Sanders and Japanese scientist Dr. Shimada to force them to help him kill the creatures.  After a bunch of failed attempts at luring and capturing or killing them, Debbie and Shimada have random sex and hit on the idea they could use pheromones to lure them back to the Arctic.

Is this where the epic showdown finally happens?: After an incredibly long “sub marine navigation” sequence where they have to navigate the under water ice trenches, yes.  The final battle between these titans begins:

Wow, that was anti-climactic: Yeah, Toho, this is not but based on the title of the sequel, Mega Shark won since he’s up against Crocosaurus next with Urkel stuck in the middle, but we’ll get to that in a bit.

Is it worth watching?: If you’re in the mood for a stupid monster battle, then yes.  Debbie Gibson and Lorenzo Lamas have the same energy level that Ian Zeiring had in Sharknado where they are trying to play it straight even when insanity is occuring around them which helps make it more fun and there’s the ridiculous scenes of Giant Octopus and Mega Shark rampaging across the globe.  If you’re looking for more Sharknadoesque craziness, this would be a good double feature with it.

Next Up: Before Disney lost millions on John Carter, The Aslyum had their own adaptation of A Princess of Mars, to capitalize on Avatar and starring Antonio Sabato Jr and Traci Lords.