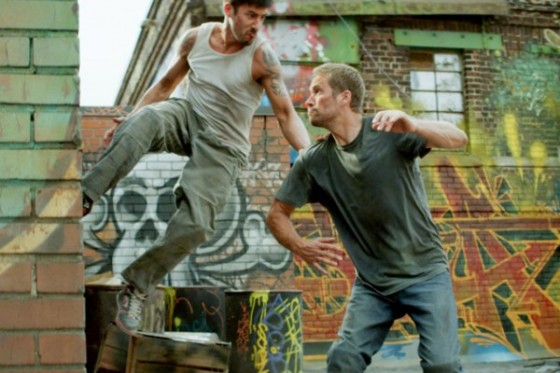 The latest action movie from the Luc Besson/Europacorp factory is a remake of the parkour filled District B13.  The star of that movie, and co-creator of the entire parkour movement, David Belle co-stars with the late Paul Walker for a dumb but fun appetizer before the Summer blockbusters arrive in force.

In the near future, Detroit, as usual, is filled with crime, especially the Brick Mansions neighborhood run by gangster/drug dealer Tremaine Alexander (RZA).  An “Escape from New York” style barrier is erected around the area and traffic in and out is highly regulated.  Ex-con turned lone defender of the neighborhood, Lino (Belle), tries to stop Alexander’s drug business by hijacking shipments while undercover cop, Damien Collier (Walker) is after Alexander and his organization because Alexander killed his father.  The two are paired up when a nuclear bomb is hijacked by Alexander and threatens to blow up Brick Mansions and, to make matters worse, Lino’s ex-girlfriend, Lola, is kidnapped as well.  The plot takes about 5 layers of disbelief to be suspended but, if you can go along with it’s crazy logic and characters, it moves along at an incredibly brisk pace and is pretty much non-stop action right from the get go.

It’s kind of surprising to me that David Belle has only appeared in a few movies, including both District B13 movies and things like The Family last year and Metal Hurlant Chronicles, because he’s a fun and kinetic personality.  His ability to move through environments does not seem human and the opening action sequence is an amazing showcase for his skills as he escapes from Tremaine’s goons.  It’s a little disappointing that there isn’t really another full on parkour sequence in the movie.  It’s sprinkled in every other action sequence but it’s more garnish when it really should be the main course.  Perhaps because Paul Walker is the bigger star, there is a surprising number of car chases  in Brick Mansions but they have a slightly unnerving feeling now considering what happened to Walker, especially as they all end in a crash. Just like Belle’s opening, Walker’s introductory action scene is a high point of the movie as he hangs on the back and eventually makes his way into the car of a fleeing crime boss while undercover.  When Walker and Belle team up, there’s a bunch of fun sequences and back and forth between them, but nothing really lives up their solo intro scenes.  Walker is basically playing Brian O’Connor, which is fine and he’s kind of the straight man in the buddy relationship between himself and Belle.  RZA is the weakest link of the movie, not really chewing scenery enough and fluctuating back and forth between having a Jamaician(?) accent and not.  I think the RZA has the highest ratio of appearances vs talent of anyone right now, as he’s in a ton of movies coming up but is kind of terrible in all of the movies he’s been in so far.

Brick Mansions is an extremely fun showcase for action that is really enjoyable if you can go along with the insanely dumb plot.  As a final full movie for Paul Walker, it’s a nice showcase for his charm and action persona and David Belle is a delight to watch leaping and jumping through everything in the environment.