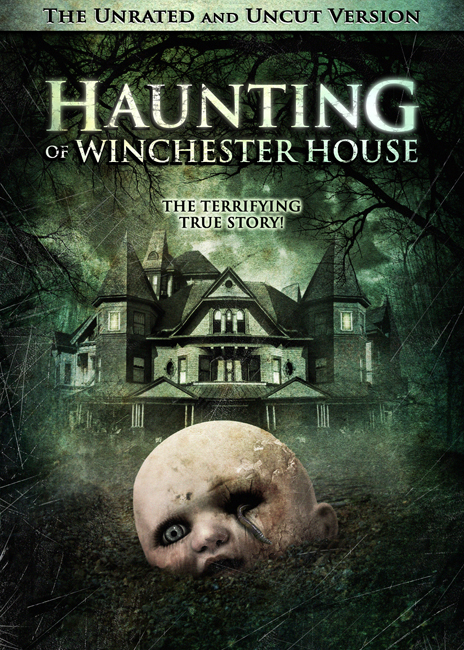 Coinciding with the release of The Haunting in Connecticut and also, most likely trying to capitalize on the trend of lower budget exorcism/haunting movies that is still going strong, The Asylum unleashed Haunting of Winchester House.

No known actors in this one?: Nope and not any of the Asylum regulars either.  Sitting between the “higher” budget Princess of Mars and Transmorphers: Fall of Man, this is probably one of those Asylum movies that they filmed in about a week at a local bed and breakfast.

I see it’s “based on a true story” on the DVD art:  Yes, it takes it’s inspiration from the actual Winchester House, where Sarah Winchester, the wife of gun manufacturer William Winchester.  After William died, Sarah used his wealth to build an insane mansion full of dead ends, stairs to nowhere and empty rooms because she believed that the ghosts of victims of Winchester pistols and rifles were haunting her and she wanted the house to be a spiritual maze to confuse them.  This is all actually mentioned in the movie, so at least one person has watched History Channel or read Wikipedia over at The Asylum.

Is that the plot of the movie?: The plot follows a family that moves into the house for…reasons?  There’s hints that they lost a baby recently and are moving to get away but then later they mention they are only there for a few months, so maybe it’s like a Shining situation where they took a job to be caretakers?  They start seeing various spirits and eventually their daughter, Haley, is captured by the vengeful spirit of Sarah Winchester, who is less scary than the old woman from House on Haunted Hill.

The parents, Drake and Susan, recruit their new neighbor(?), Harrison Dent, who is a paranormal investigator and he explains the different levels of ghosts and tries to help them get Haley back before the omnipresent wind blows him into a fireplace and kills him. 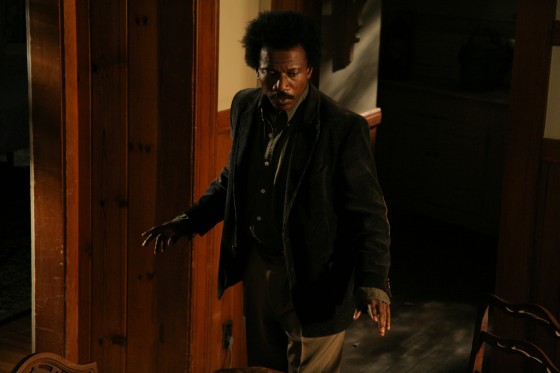 Wind? I thought we were dealing with ghosts?: I guess maybe the wind is caused by the ghosts?  In any case, the wind is the most dangerous force of this movie, killing at one police officer by blowing them off the porch and ripping open doors and windows randomly throughout the movie.  It also blows out the candelabra Drake and Susan use to light their way, even though it’s 2009 and we have flashlights.  That’s one of the many things that The Asylum seems to throw in just because “that’s what you do in horror movies” like Victorian era clothing, inappropriate music and more.  It’s super hodge-podge. 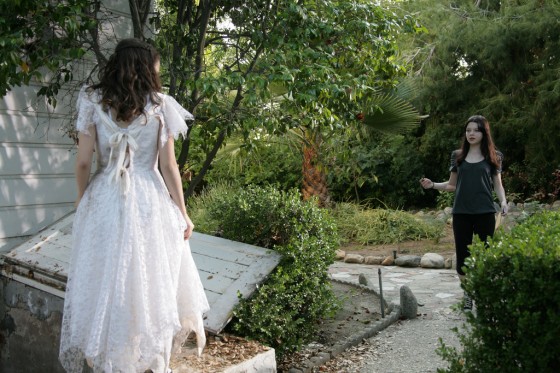 Do they eventually stop the ghosts and get their daughter back?:  Yes, but buckle up for this insanity:  Drake and Susan follow a deaf ghost who was a servant of Sarah Winchester to the attic.  There, they interpret a terrible crayon drawing of a girl as the trunk in the attic and open it to discover the body of Annie Winchester, Sarah’s daughter and the reason for her haunting.  A flashback reveals that Annie was playing and hiding in the trunk back in olden times when the deaf guy piled a bunch of boxes on it and left and then no one thought to look in the attic for her and she died.  Sarah and Annie are finally reunited and Drake and Susan get Haley back but their car is missing from the driveway.  In the second insane twist, Susan finds their car crashed off the side of a cliff while they are walking back to civilization and realizes that they all have been dead for the entire movie, and then they do a Sixth Sense style flashback montage to ostensibly reveal “everything you missed!” but it’s all just random scenes that don’t really reveal anything.

Is it worth watching?:  Dear god, no.  It’s incredibly boring and not the least bit scary.  You would think that The Asylum would be able to match the lower budget horror movies better than gigantic blockbusters but they still fail just as badly with this.  The actual story of the Winchester House would probably make a pretty cool movie in better hands, like say James Wan, but you’d be better off just reading the Wikipedia article about Winchester House or catching a documentary about it from Discovery or History Channel.

Next Up: The Terminators arrive to…terminate?

Helen Mirren Gets Haunted in February with Winchester (Trailer)